One day in Japan, a city was suddenly attacked by a monster from the Tōgō Mountain called a Wanigodon that appeared seemingly for nowhere. The Self Defense Force was rushed in to dispose of the monster using missile launchers to no avail. Once The Scientific Defense Guard arrived, Kei used a special bazooka to bring the monster down for good, quickly ending Wanigodon's rampage after several shots. However, it was theorized that there would be more members of Wanigodon's species which had Kei worry to the point of barely being able to sleep.

That same evening a boy named Takashi found a baby Wanigodon near his house, proceeded to take care of the little monster, and named it Pero. The Next day, Kei found Takashi near a cove taking care of the ever growing Pero and told the boy that he would grow up to cause destruction much to Takashi not believing him. Moments later, Pero grew to full size with Choichiro turning into Ultraman Joneus within moments. At first it seemed as though Joneus had the upper hand until two other Wanigodon's appeared from the nearby caves to ambush him. Once Kei remembered that Pero was afraid of water, he deduced the monster was weak to the ocean's salt. Kei then informed Joneus of the monsters weakness, the Ultra Warrior then threw the three monster into the ocean, also finishing Pero off with the Planium Beam. 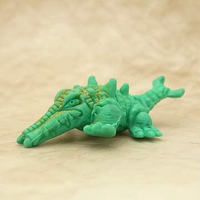 Wanigodon in the juvenile stage