"I'm the strongest Alien Guts in the universe... "

―Vorst before his death, Split! UPG.

None
Vorst[1] (ボルスト Borusuto) is an Alien Guts (ガッツ星人 Gatsu Seijin) who first appeared in Ultraman Ginga S, boasting to be the strongest warrior in the galaxy. Originally the supporting antagonist of the first half, he was promoted to the secondary antagonist in the second half after One Zero defected from Alien Chibull Exceller. After repeatedly failing in his missions, he was forced by Exceller to become a mindless giant before Ultraman Ginga Strium saved him. Sadly, Exceller then brutally murdered Vorst in cold blood by the use of the Victorium Cannon.

Vorst is extremely arrogant and proud of himself, saying he is the strongest warrior in the universe. When referring to himself, Vorst regularly uses the pronoun and honorific "Ore-sama" (俺様, literally "my magnificent self"), an overly ornate and assertive phrasing of 'myself' which hints at his view that he is above everyone else. In addition, Vorst is quite self-assured, to the point that this arrogance has become a weakness; it causes him to behave rather recklessly, and sometimes disobey direct orders to retreat from Exceller, forcing the latter to teleport him away from a lost battle against his will.

He first appeared to serve with Android One Zero after her recent failures against Ultraman Victory. Together, they led an army of Inpelaizers to attack the city and Ultraman Ginga while he instructed One Zero to transport the Victorium and he supervised. They were soon found by Sho and were forced to retreat after One Zero opened a Chiburoid ball. After they escaped, Vorst blamed One Zero for dawdling and soon they fight. Even though One Zero's martial arts skills gained her the upper hand at first, Vorst won by creating an illusion of himself and stunned her with his Paralysis Ray before warning her to not make any more mistakes. He then left to resume command of the Inpelaizer army and instructed them to snuff out Ultraman Ginga.

After Sho/Ultraman Victory appeared and managed to defeat several Inpelaizers that were "Monslived" by Chiburoids, Guts complimented Victoryon his fighting skills before he took a Chibull Spark and Monslived into King Joe Custom. The robot was able to pummel Victory and decided to end Victory until Ultraman Ginga managed to saved him and changed into Ginga Strium to defeat the Inpelaizer armies alongside with King Joe Custom. After which Vorst was left stammering and vows to make his next battle with Ginga his last. Pride of a Warrior

He would later used several Spark Dolls in the series but unlike One Zero, he was able to regain them before Hikaru or Sho would collect. As the series entered its second season, Vorst was promoted into Exceller's second-in-command after One Zero became a deserter. Exceller also apologized to Vorst for underestimating him and gave him a Chibull Circuit to make the powers of his and his Lived Monsters boosted. Among the Spark Dolls he used were:

Exceller became frustrated by this and, after announcing that he is done being ordered around and decides to ready himself for Lugiel's arrival, fired a pink fireball at Vorst that put him under his control and was sent to Earth Kaiju-sized. He attacked a nearby construction site when Ultraman Ginga, and other UPG members helping him, appeared to fight him. Eventually, Vorst created an illusion of himself, fired red bolts at Ginga, and gained the upper hand until Ginga transformed into Ginga Strium, threw one Guts at the other cancelling out the illusion, and knocked off the badge, regaining consciousness in the process. Vorst wanted to leave for a moment to attack Exceller before resuming their fight but Arisa Sugita fired the new Victorium cannon at him, while Ginga protected himself with Jack's Ultra Barrier, destroying him once and for all.

Sometime in-between episode 8 and 9 of Ginga S, Exceller "Lived" Vorst once more when he was making maintenance and adjustments on his Exosuit. He let Vorst man the spaceship's bridge while he's in the maintenance lab. While there, Vorst saw the 5 Kaiju components of Five King on the strategy table, and wondered why all five were placed there. Exceller then contacted Vorst through a holo-monitor to explain his "Super Fusion" experiments that was based on Tyrant, a monster who was previously "Lived" using "Super Fusion". 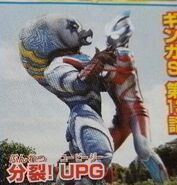 A behind the scenes shot 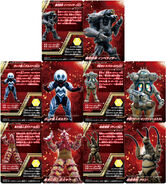