"We were the ones who blew up our own home planet. Zagi will come, and when he revives, this planet will be destroyed."

None
The Visitors (来訪者 Raihō-sha) are unnamed jellyfish-like aliens that appeared in Ultraman Nexus. They attempted to create a clone of Ultraman Noa, but failed, and instead created Dark Zagi.

The visitors lived in a galaxy besieged by the threat of Space Beasts. After the giant Ultraman Noa fell asleep from exhaustion, the Visitors try to create their own protector in the form of Zagi. However, Zagi was proven to be beyond their control, as the giant released Space Beasts around their planets, which forced them to blow up their own sun at once in effort to destroy them.

While the original Ultraman Noa had already dealt with Zagi, the Visitors used Zagi's remains and created Lethe, bringing it to the Earth and agreed to give humans their technology only if they would use it to defend Earth from the Space Beasts. They handed over Lethe and the technology, and Lethe was eventually placed in Level 0 of TLT-J's headquarters. Using a young Kaimoto, the Visitors speak through the boy as they narrate their pasts and warn humanity of Zagi's arrival. Unfortunately, while their prediction did turn out to be true, they did not expect their creation to infiltrate the ranks of TLT.

Nine years later, when Zagi revealed himself to the TLT and Night Raider in his human form Mitsuhiko Ishibori, the Visitors tried to stop him but because their power had grown weaker, Zagi managed to bypass their security and marched his way to Lethe. 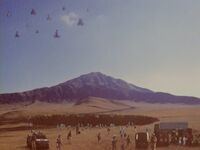 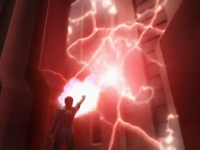