None
Vision Dragon (ヴィジョンの龍 Vijon no Ryū) is the first Kaiju to appear in the Ultraman Gaia TV series.

When Gamu Takayama was proceding in a virtual reality experiment, to discover the will of the Earth, he briefly encountered the mysterious glowing red giant, Ultraman Gaia, at the end of a tunnel of light. He witnessed a fierce battle between Gaia and the snake-like Dragon, inside what appeared to be the center of the Earth itself. Gaia eventually used his finishing move, the Photon Edge, completely obliterating the Vision Dragon before making contact with Gamu. 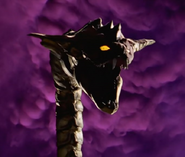