Takeshi's Castle (non-canon)
Veron (ベロン Beron) was a Kaiju that appears in the TV series, Ultraman Taro. A monster with a particular affinity to alcohol, he crash landed on Earth and proceeded to wander in an intoxicated state until Taro and a group of Alien File stepped in to help him leave the planet.

Veron crashed on Earth off-screen. He proceeded to drunkenly make his way through the city. ZAT appeared to try and stop the beast but it was in vain as Veron kept teleporting away when they attacked him. A young boy named Taro later discovered the Alien Files who he agreed to help them reclaim Veron. They did this by giving him some sweet rice wine and getting him to dance until he fell asleep. This didn't work, even with the help of ZAT. Seeing all hope was lost, Kotaro Higashi transformed into Ultraman Taro. Veron paused and challenged Taro to a dance-off. After a few rounds however, Taro decides enough was enough and poured the water-filled Ultra Bucket over Veron, sobering him up. Taro and the Alien Files then took Veron back to space. 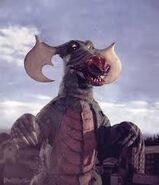 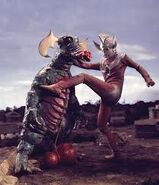 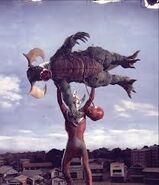 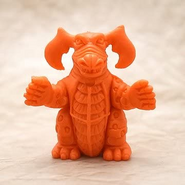 A Veron eraser
Community content is available under CC-BY-SA unless otherwise noted.
Advertisement