Verokron (ベロクロン Berokuron)[1] is a missile Terrible-Monster created by Yapool that was from the TV series Ultraman Ace. Verokron was mentioned to be created by a combination of Space Monster and sea coral. It debuted in the first episode of the series, making it the very first Terrible-Monster which Ace fought. Alongside fellow antagonists Vakishim, Ace Killer and Baraba, Verokron is among the best known of Yapool's creations, and has made several reappearances over the course of the Ultraman Series.

Yapool's first Terrible-Monster to attack Earth, Verokron was unleashed upon the planet, attacking a power plant and a nearby suburb with his numerous array of weapons. Despite opposition from jets that opened fire on him, Verokron used his arsenal to obliterate them with ease. During his attack, Verokron killed two humans known as Seiji Hokuto and Yuko Minami, who were rescuing people during the attack. Impressed with their sacrifices, the Ultra Brothers sent their newest member, Ultraman Ace to merge with the two humans. In response to Verokron's attack on earth, TAC was formed to fight it and Minami and Hokuto were among them.

A few days later Yapool released Verokron again, this time in the middle of Tokyo. Resuming its onslaught, Verokron was soon met by TAC, who came to stop his reign of terror. TAC attacked the monstrous bio-weapon, but their assaults did nothing to the monster and it was quick to return fire, shooting down some of their jets with his organic missiles. Even after discovering Verokron's weak spot inside his mouth, Verokron quickly recovered and shot down Hokuto's jet with its flames. After the Ultra Rings signaled the time, Hokuto and Minami touched rings, transforming into Ultraman Ace for the first time. At first, Ace had the upper hand, by outmaneuvering the kaiju, shrugging off his missiles, and dodging his hand blast. However the tables were turned, when Verokron attacked Ace with his fire breath. Verokron then used his capture rings to ensnare Ace and weaken him with his finger tip beams. Before Ace could recover, Verokron charged at him, knocking Ace down. While the hero tried to get up, Verokron continued to smack the him down. Verokron then began to stomp the hero into the dirt. Ace's timer began to blink! Verokron roared as it seemed he was about to win the battle. However Ace managed to break free. Ace used his Punch Laser to shoot Verokron in the mouth. After tossing the Terrible-Monster over head, Ace used the Metalium Beam, striking Verokron in the forehead, ultimately killing the Terrible-Monster. Shine! The Five Ultra Brothers

Yapool later schemed his vengeance on Hokuto, who was now the sole host of Ace now that Minami had left after countless failure of his plans. He disguised himself as a female dentist and tried to make Hokuto to go insane by placing a spell on his teeth while he was given dental care, causing Verokron II to appear only in front of his eyes everywhere. After Hokuto saw several delusions of Verokron II that are not seen by anyone else, he took action by himself. He was fired from TAC for his unwarranted assault on what they did not see.

After Reconstructed Bemstar was starting to lose to Ultraman Taro, Yapool summoned weaker versions of his Terrible-Monsters, Sabotendar and Verokron II to help it. However, they were no match for Taro's might and ZAT's assaults. In the end, Remodeled Verokron was destroyed by ZAT's weapons. Counterattack! Monster Army

Verokron reappeared in episode 26 of the series Ultraman Mebius.

The third and final Terrible-Monster sent by Yapool to return to Earth, Verokron appeared out of the sky from the same dimension that Vakishim and Doragory emerged from, first attacking GUYS's Captain Shingo Sakomizu before disappearing. Days later, Verokron reappeared near GUYS's HQ while they were developing a new weapon. GUYS attacked Verokron but with no success. Suddenly, GUYS noticed that Yapool was trying to break through and invade Earth too! Ultraman Mebius appeared to face Verokron while GUYS tried to get rid of Yapool's portal. Verokron put up a good fight, but ultimately Mebius destroyed him with his Mebium Shoot, as GUYS used its new weapon to close the nearly open dimension for good, preventing any more of Yapool's Terrible-Monster from appearing again. Flying to Tomorrow

One day, a threatening Verokron appeared attacking the ZAP SPACY. Rei sent his Gomora to do battle against the Terrible-Monster, but Verokron's size was too much for Gomora to handle with ease and Verokron began to beat down Gomora. However ZAP SPACY interfered by distracting Verokron, allowing Gomora to attack. As it seemed Gomora was gaining the upper hand, a Doragory came onto the scene to assist the other Terrible-Monster by attacking Gomora. Rei summoned Eleking to even the odds for Gomora by having him battle Doragory. With the odds now evened, Verokron and Gomora continued their fight. Verokron gained the upper hand by assaulting Gomora with a barrage of missiles. However, ZAP intervened by firing a laser into into the weak spot in Verokron's mouth. This allowed Gomora to gain the upper hand of the fight and destroy Verokron with his Super Oscillatory Wave. Ultraman

Verokron reappeared in the movie Mega Monster Battle: Ultra Galaxy Legends The Movie as one of Ultraman Belial's 100 Monster Army. He was first seen rising out of the ground along with King Joe Black, Nova, Gomess (S), Alien Baltan, and Antlar before being re-captured by Belial. He then teamed up with Doragory, Fire Golza, King Joe Black, Alien Guts, Alien Metron, Banpira, Eleking, Gan-Q, King Pandon, and Nova to take on Ultraseven. When Reimon and Gomora go berserk, Verokron was called back along with the other surviving monsters to watch Gomora fight the Ultras. When Ultraman Zero arrived, Verokron teamed up with the remaining monsters to take down Zero. He was the third monster to be killed by Ultraman Zero's Zero Sluggers, behind Arstron and King Pandon and followed by Sadola and Alien Hipporit.

Verokron was created by Hyper Zetton (Imago) summoning multiple Sphere to battle against Ultraman Saga, but before the fight began the Ultra Brothers, Ultraman, Seven, Jack, Ace, and Leo appeared to help battle the monsters while Saga fights Hyper Zetton. Verokron fought with Ace for a short period of time, but was eventually killed by Ace's Metalium Beam. Ultraman Saga

Verokron was "Monslived" by Alien Guts Vorst along with Doragory, who was Lived by Vorst's clone. Sho transformed into Ultraman Victory to stop them. Both the Terrible-Monster duo and Victory put up a good fight with each other until Doragory started to bite into Victory, causing him to bleed. Satisfied with this, the two Terrible-Monsters teleported away. The two then reappeared and began to rampage through the city. With Sho out of commission, Hikaru Raido transformed into Ultraman Ginga to stop them. After the latter transforming into Ginga Strium, Verokron fired a couple of missiles at him and, despite Ginga dodging them, managed to put him on the ropes. Verokron then noticed the UPG and dodged their fire by duplicating instantly due to Vorst's cloning ability. Despite his injury from earlier, Sho re-transformed into Victory to help Ginga. Verokron then fired his missiles at him but Shepherdon appeared at the last minute, protecting him, and sent Verokron flying with his Shepherdon Victorium Flash. Verokron then duplicated himself and fired his missiles at the defenseless kaiju, the latter then transforming into a Spark Doll. Both Verokron and Doragory were defeated when Ginga fired his Ginga Spark Lance at them and then Victory slashed them with his new Shepherdon Saber. Holy Sword to the Future

Verokron, along with Doragory and Vakishim, were summoned by Yapool to deal with Leo and Astra, who were sent by Ultraman King to stop the reviving Space Emperor on Planet Gua. The Leo brothers fought them while Victory was fighting Victory Killer and Lunaticks. At first it seemed that Leo and his brother were getting the upper hand until the dimensional distortion expanded and Juda was revived. Finally, Victory, Ace and Ginga arrived to help the Leo Brothers with Yapool likewise assisted his Terrible-Monster, with Leo fighting Vakishim, Astra fighting Doragory, Ace fighting his sworn enemy Verokron and Ginga and Victory fighting Yapool. Verokron tried to attack Ace with his missiles, but the Ultra dodged them and finished off the Terrible-Monsters with his Vertical Guillotine. Ultra Fight Victory

Verokron appeared as a Cyber Card in the final episode of Ultraman X. After Ultraman X spoke out to Gomora and struck Greeza right in the center of his chest, Verokron, along with all of the other Cyber Cards, traveled to X and united with him. Cyber Verokron's power was used to help form the Hybrid Armor and power up the Ultimate Xanadium to defeat Greeza once and for all. Verokron, along with the numerous other Cyber Cards and Spark Dolls, then appeared and thanked Daichi as he thanked them. The Rainbow Land

Verokron appears alongside Vakishim orbiting around the Planet Kanon, both are infected by the Bezelb's Kugustu. Cosmos try to exorcise the poison but failed.

During their attack on Planet Kanon, the War Deity managed to halt their assault long in hopes of contacting with the Queen Bezelb before Orb and Dyna's interference. As both Ultras fought against the Terrible-Monster, Verokron survived getting thrown with Orb's energy halo before retreating to Psychi's ship with other Bezelbs. Although only Vakishim and Arstron were shown afterwards, what happened to Verokron is unknown. Ultraman Orb THE ORIGIN SAGA 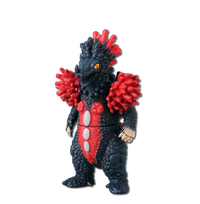 Verokron has a Spark Doll in Ultraman Ginga S. Like all Spark Dolls, it is assumed that Verokron was turned into a Spark Doll by Dark Lugiel at the conclusion of the Dark Spark War, then somehow landed on Earth, either with Dark Lugiel or as a result of falling into Earth's atmosphere.

Verokron reappeared in the puzzle role-playing game for mobile devices, Ultraman Galaxy as a UR (Ultra Rare) card that players can unlock in an event called "The Beast of Horror" with a rare chance of getting Verokron.

Baltan Battler・Barel, Guts Gunner Garm, and Magma Master Magna hunted this monster in this short film. They were first seen charging at him while dodging Verokron's fire stream and organic cluster missiles. When one of Verokron's missiles headed towards Magna, his metal suddenly glowed and he was surrounded by energy. He caught the missile and threw back at him, only for Verokron to counter it with another missile, but was knocked down by the resulting explosion. When Verokron got back up, he struck with his hand but the trio escaped towards higher ground and then planned a new attack. Barel leaped upwards, created clones, and all of them destroyed the Terrible-Monster's just fired missiles with their Cyclone Saucers while Garm fired at them with his Energy Rifles to protect Magna. Magna's body suddenly glows with power and leaps towards Verokron. He catches a missile Verokron and fired and threw at him. The missile went inside of Verokron via his mouth and it caused a chain reaction that resulted in Verokron blowing itself and the planet they were on as well.