None
Vekira (ベキラ Bekira)[1] was a Kaiju that first appeared in episode 8 of Ultraman Leo.

A Kaiju of unknown origins, Vekira entered one of Japan's populated cities and began its devastating rampage. MAC began its counterattack, but the monster began spewing explosive sparks from its mouth! One of the jets was forced down, but before Ultraman Leo could appear, Vekira vanished into a yellow cloud.  It reappeared sometime later and restarted its assault. Again MAC began to attack it and again they failed. This time, however, Ultraman Leo was brought into action against the kaiju. The red giant smashed the Kaiju around, even unleashing his energy ball before finishing him off with his lethal Leo Kick! 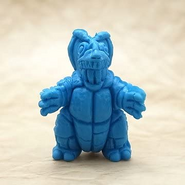 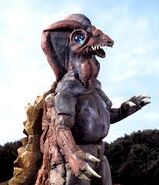 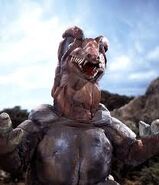 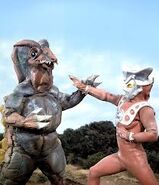 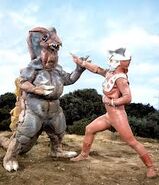 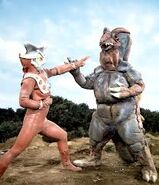