Varricane (バリケーン Barikēn) was a jellyfish monster that had the power to create powerful storms. It first appeared on episode 28 of Return of Ultraman.

Varricane rose from hiding to assault the world of man. His existence was first noticed when a typhoon developed out of nowhere in the ocean. While typhoons weren’t particularly uncommon, MAT was still concerned at the suddenness of this particular storm appearing and the fact it was the wrong season for them. They quickly deployed to investigate whether or not a monster was truly involved in the storm but found nothing. However, the Typhoon continued to become stranger and more destructive, with tornadoes forming as well. All the while, Varricane watched from within the storm itself. MAT arrived after the devastation but found no signs of the creature.

Varricane next appeared offshore, his glowing eyes attracting the attentions of the locals. MAT was left without answers but knew something wasn’t right with the Typhoon. They soon received calls reporting the strange sighting, but when they arrived, the beast had eluded them again. Finally, the elusive Kaiju appeared in the city itself, near Hideki Go, who called it into the rest of MAT. Soon, they were ready to assault the monster and finally launched into action against the bizarre monster, who they found levitating in midair on their arrival but had yet to actually attack the city yet.

Returning to base, the group examined pictures of the monster, trying to locate any type of weakness the behemoth might have. After planning, they flew into action again but strangely, the monster kept turning its back at them. Missiles were prepared and beacons were launched into the beast, but it merely landed and began attacking, then summoned up a powerful typhoon in a matter of moments. As the storm began tearing the city apart, all MAT could do was try to remain airborne in the fierce winds as the monster continued its attack. The missiles were launched at the behemoth but their impacts didn't affect it, it merely intensified the storm in response.

Go, realizing only the power of Ultraman Jack could stand a chance against the kaiju, went outside and summoned the hero. Jack quickly flew to the battlefield and attacked. However, the weather Kaiju latched onto him with his tentacles, shocking him with electricity. Jack managed to fight free, but the weather beast used his explosive flashes, forcing him to dodge. Jack was brought to his knees by the beast's toxic gas as he tried to dodge and then beaten down and choked by its tentacles. Jack managed to break free and try to use the Spacium Beam but the monster was unaffected by the finishing ray. Varricane first summoned a tornado to buffet his enemy as Jack's color timer began to blink, then flew high into the sky, followed by Jack. As the two fought, Jack fired a barrage of missile-like blasts from his hands to force the creature down to the ground. As it tried to affect the storm itself, Jack flew above it and began to spin identical to the top of the creature’s head, summoning an energy tornado of his own. Ultraman Jack used his attack to carry the weather monster high above and destroyed it in the harsh conditions of space.

Although not seen, Varricane was seen in an animated flashback as part of the Monster Army lead by Alien Empera in episode 25 of Ultraman Taro. Burn On! The Six Ultra Brothers 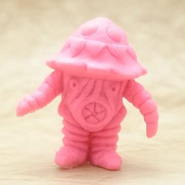 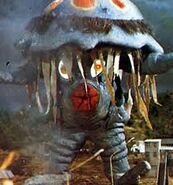 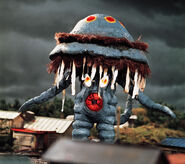 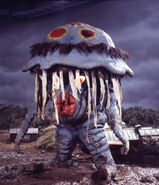 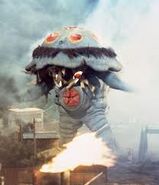