The Vanguerrillas were microorganisms that sucked the blood off of the Amazon natives and lived in a lake near Japan. After more victims came to Vanguerrillas it grew 2 meters and was then stopped by the 10-4 attack team. 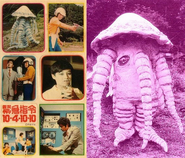