None
The Valis Raiders (バリスレイダー Barisu Reidā)[1] are android troops created by Gillvalis in Ultraman Geed The Movie: Connect the Wishes!.

As opposed to the gigantic Galactron, Valis Raiders were man-sized and were usually seen guarding their master's Core. When Jugglus Juggler overheard Gillvalis' next destination as Planet Earth, a small platoon chased him before he exited Planet Kushia.

In hopes of hunting human survivors from both the Galactron Army's onslaught and Gillvalis' planetary-wide digitization, they were personally sent to deal with Airu Higa and Riku Asakura's convoy.

After Gillvalis' destruction, Celebro salvages remains from the robot to build the Valis Raiders under his own leadership.[1] They were used to invade the STORAGE base and abduct Riku. Shota Hebikura saw through their disguise and knocked one of them out, but another one teleported Riku away. Yuka Ohta managed to track down Riku through an analysis of the knocked out Valis Raider's records, and Hebikura sent Haruki and Yoko off to rescue Riku, following them to an abandoned industrial area. They struggled against the androids until Ultraman Z took over Haruki's body to fight against them, and managed to defeat them all. His Majesty's Medal When Juggler ambushed "Shinya" at the Monster Research Center, the possessed researcher attempted to use a pair of Valis Raiders to cover his escape, but doing so lead to the loss of his previously acquired Kaiju Medals that made up Five King. The Mystic Power 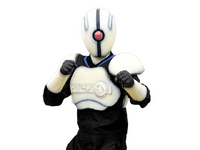