Vakishim (バキシム Bakishimu)[1] is a Terrible-Monster created by Yapool from the television series, Ultraman Ace. Created through the combination of a space monster and a caterpillar, the first Vakishim was simply one of Yapool's disguises, though subsequent examples appeared separate from, or together with their master in later instalments of the Ultraman Series.

Yapool as Vakishim decided to take matters on his own to attack Earth, first by menacing Minami (the female co-host of Ultraman Ace). While she managed to survive, Vakishim shot down a passing JAL Boeing 747 and disappeared. Vakishim managed to impersonate a small boy and used him as a puppet to hide from TAC. As the boy, he set his grandparents' and his home village on fire in a brutal display. Once TAC found out about the truth, Vakishim transformed into his true form and fled through his dimensional portal. Vakishim reappeared out from a different portal near TAC's HQ and proceeded to attack, with TAC's fighter jets' attacks doing nothing to the Terrible-Monster. Finally, Ultraman Ace arrived to do battle and after a brutal fight, Ultraman Ace destroyed Vakishim's horn with the Star Beam Cutter and kills Vakishim with the Ace Spark followed by the Ace Slash. Despite Vakishim's defeat, Yapool managed to survive.

Sometime later, it was revealed that the boy Vakishim used to impersonate had, in truth, already died sometime before the Terrible-Monster's own debut. Burn! Terrible-Monster Hell

Vakishim reappeared in episode 24 of the series, Ultraman Mebius.

Appearing out of the sky much like his original appearance, Vakishim attacked Ryu and Mirai (Ultraman Mebius's human form,) injuring Mirai's left arm and abducting Ryu. Upon awakening, Mirai found out that Ryu's body was being possessed by Yapool as his puppet to toy with GUYS and its newest objective.

Once Yapool's identity was revealed to GUYS, Yapool unleashed Vakishim again to further stall GUYS from stopping him. Yapool then threatened Mirai that he had a bomb set up that with go off unless he shoots Ryu. Without any other option, Mirai shot Ryu (who managed to survive), releasing him from Yapool's control, who went on to possess Vakishim and increase his Terrible-Monster's power. Mirai, enraged at Ryu's undeserving demise, transformed into Ultraman Mebius to do battle against Vakishim. However, Mebius' arm was still injured from Vakishim attacking him earlier on, thus Vakishim had the advantage. However after the assistance of Crew GUYS, Mebius managed to transform into Mebius Brave and sliced Vakishim in half with the Acti-Blade Attack, therefore destroying him. The Resurrection of Yapool

In this series, Vakishim was the second monster owned by Alien Metron (after his Doragory was nearly killed by Rei). Alien Metron looked to get vengeance after he was attacked by Reimon when he was in Burst Mode, foolishly provoking a recently rehabilitated Rei for a rematch. He further tried to get Rei's attention by using Vakishim to attack the ZAP SPACY crew. Finally, Reimon returned in his Burst Mode and used his Reionic Burst Gomora to do battle, Despite getting a few lucky hits, he was no match for Gomora and was easily beaten into submission. After a long and brutal smack-down, Gomora was victorious and destroyed Vakishim with his Super Ocsillatory Wave. At the End of the Runway

Vakishim reappeared in the movie Mega Monster Battle: Ultra Galaxy Legends The Movie as one of Ultraman Belial's 100 Monster Army. He teamed up with Hoe, Tyrant, Galberos, Alien Reflect, and Sadola to take down Litra. Vakishim was called back by Belial along with the surviving monsters to watch Reionic Burst Gomora take on the Ultras and was sent back out to fight Ultraman Zero when he arrived. He was eventually the third monster to be destroyed by Ultraman Zero's Wide Zero Shot behind Telesdon and Alien Temperor and followed up by Gudon.

Vakishim appeared in Ultraman Ginga as a Spark Doll. In episode 7, he was seen along with many different monsters are seen as they cheer on Ultraman Ginga while he fights Dark Galberos. The Closed World

It is likely that Vakishim returned to space in his original form after Ultraman Ginga defeated Dark Lugiel. Your Future

Vakishim first appears when it emerges from its dimension to ours under the control of Android One Zero. Hikaru Raido transforms into Ultraman Ginga to fight him. Ginga was about to perform the Ginga Hyper Kick on the Terrible-Monster when Vakishim grabs hold of him and manages to swing him around in circles until letting go and firing his One Horn Missiles and launched his horn at him soon after that. Just when One Zero was about to finish him off, Yapool suddenly appears and takes control away from One Zero, before sending the Terrible-Monster back to its dimension. This event revealed that Yapool was using Vakishim as a disguise, like he had done before, when the monster was turned into a Spark Doll by Dark Lugiel, thus leaving him trapped within Vakishim's spark doll for thousands of years.

Halfway through the episode, Vakishim returns after Sho transforms into Ultraman Victory. Vakishim fired his missiles and Victory dodged them all while the Ultra was flying in mid-air. The Terrible-Monster then fired his Needle Energy Blasts and struck Victory with them. Sho then UITrans King Joe Launcher and both of them fired their energy blasts at each other up to a stalemate until Ginga arrives. Victory then calls back the Launcher to fight him close combat until Yapool lost control over Gouki Matsumoto. He orders Vakishim to retreat, but Victory followed pursuit and eventually brought Vakishim back to our dimension. After Ginga transfroms into Ginga Strium and Sho UITrans his right hand into Gudon Whip, Vakishim fights Victory alongside Yapool, who fights Ginga, After Vakishim was struck with the Gudon Whip multiple times, Victory finishes off the Terrible-Monster with the Victorium Shoot. Friend & Demon

Vakishim appeared who summoned by Yapool along with Doragory and Verokron, to deal with Leo and Astra, who were sent by Ultraman King to stop the reviving Space Emperor on Planet Gua. The Leo brothers fought them while Ultraman Victory was fighting Ace Killer and Lunaticks. At first it seemed that Leo and his brother were getting the upper hand until the dimensional distortion expanded and Juda was revived. Finally, Victory, Ace and Ginga arrived to help the Leo Brothers. Yapool likewise assisted his Terrible-Monster, with Leo fighting Vakhishim, Astra fighting Doragory, Ace fighting his sworn enemy Verokron and Ginga and Victory fighting Yapool. Doragory, along with Vakishim, tried to finish off the Leo Brothers with their Electric Lightning Energy Bolts and Horn Launchers respectively, but the brothers dodged the attacks and Astra finished off Doragory with his Astra Kick and Leo finished Vakishim with his Leo Kick. Under Ace's advice, Ginga and Victory merged into Ginga Victory and killed Yapool, but everything had been too late: Juda successfully revived as he summons Super Grand King Spectre to fight the Ultramen. Ultra Fight Victory

Vakishim reappears in this spinoff series of Ultraman Orb.

He first appears floating above the planet of Alien Kanon along with Verokron, both infected with Kugustu thanks to a Bezelb. When Ultraman Cosmos arrives, the Bezelb orders the Terrible-Monster to fire at the ultra. Seeing what he had heard about was true, Cosmos tried to calm them with Full Moon Rect. However, he only snaps them out of their trance, not curing the poison which, luckily for the Bezelb, controls their mind again and fire at the hero. The two Terrible-Monster land on the planet start their rampage, heading toward the Tree of Life. As they fire at it, a golden barrier shields the tree. The one who created it reveals to be Amate, queen of the kingdom. She does her best to defend the tree, but even after spooking Vakishim and Verokron with a beam, the Terrible-Monster, under control of the Bezelb, still continue their attack. As fate is about to take hold, Ultraman Orb and Ultraman Dyna arrive to assist the War Deity. While Dyna battles Verokron, Orb fights Vakishim. Even after Cosmos comes to the assist, the Terrible-Monster don't retreat. However, after the tree is cut down by a vengeful Jugglus Juggler, Psychi calls a retreat, as the Terrible-Monster and Bezelb board the ship as it heads to Earth.

During the final battle, Vakishim, along with Arstron and two Bezelbs, teamed up with Psyqueen to destroy the tree. However, Orb, Dyna, Gaia, Agul, and Cosmos appeared to try and stop them. While Orb tried helping an infected Amate, Gaia and Agul battled Psyqueen, Cosmos fought Vakishim, and Dyna fought Arstron. In the end, Vakishim, along with Amate and Arstron, were cured when Cosmos fed them the petals of the Tree of Life, and the Kaiju and Terrible-Monster were sent somewhere far from civilization to live in peace. Ultraman Orb THE ORIGIN SAGA

The Vakishim Spark Doll was used by Android Zero One in episode 5 of Ultraman Ginga S. It is revealed that Yapool was hiding within the Spark Doll after the Dark Spark War.

Vaximum was part of the EX Series in September 2009, but was discontinued and was never rereleased. His figures are very rare, but can be found on websites, although they are commonly overpriced. 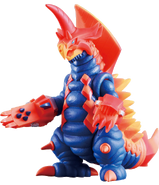 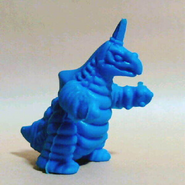