None
Vacumira (バキュミラー Bakyumirā) is a female robot that first appeared in episode 1 of Iron King.

Commanded by Shu Ichiro, member of the terroristic Shiranui Clan, Vacumira was sent against Japan to fulfill the two-thousand year old prophecy of Japan’s conquest. Its first mission was to assassinate Gentaro Shizuka, an agent of the Japan Self-Defense Forces. Approaching with cold calculated steps, the giant machine was on the verge of accomplishing its task, but Japan’s mighty hero, Iron King, intervened! Battling heavily, the guardian managed to damage Vacumira’s powerful left hand and forced the villain into total retreat. Wasting little time, the Shiranui Clan repaired their warrior and sent it back out, this time to begin leveling Japan! Destroying a highway and sucking up a bullet train, Vacumira was proving why it was chosen to lead the advanced assault. However, its reign of terror was soon challenged! Iron King and Gentaro arrived to do battle! As the battle raged and the evil machine threatened to suck out all of the precious water within Iron King, Gentaro discovered the controller of the weapon and captured the control device! He tossed it at the hard body of the metallic juggernaut, destroying it. Without the device, Vacumira self-destructed. The vile clan would have to try again if they wanted to conquer Japan. 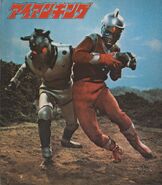