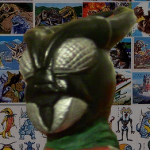 No problem, I'll help with the Dyna Kaiju, and do you know who the danged "wikia contibuter " is?

Oh and P.S about the jonias/joeneus thing the picture that you said were out dated, even if they were how does that make the facked that they said Joeneus false, just asking not tring to make another arguement.Teridax122 (talk) 08:14, August 26, 2012 (UTC)

Put this in the kiaju Race box :

Yaoyao you can't say that Forgas is the race. In Japan they say Forgas Seijin witch means Forgas Alien witch means Forgas is a planet. If you think this is like Shin Asuka/Asuka Shin thing it's not, see translating the Seijin was a translating error, a good example is the Alien Baltans they said that they came from Planet Baltan.Teridax122 (talk) 14:48, August 26, 2012 (UTC)

I dunno, the first naming escapes me. But I do know that he is called Z-Ton mostly in just games. And I don't exactly wanna trust Magazines right now, and that didn't exactly look official. However, if we can find Zetton named Z-Ton outside of video-games, prefferably in a series, then we can change it.

I love the queen Moneras.. is there a item i can buy are a fim I COULD SEE HER IN ACTION.

Of course, I see the problem. I was hoping we could've dealt with this after the Wiki improved a little, but the situation calls for it. I will talk to Teridax about it. So what, should we put up a vote, or should I make a blog post about it? I don't know if I can do it right away.

I would just like to let you know that I am still working on this 'Rule project', so to so speak. I know I haven't said much, but I am still working out ideas for Page layout and Extended rules for the users. Would this be better discussed on a blog post or in the Chat room?

Alright I don't wan't this to turn into another one of our arguments, so I'm asking are we saying the Alien Bat's subtitle is antenna alien because the translation has an alternetive, our because Alien bat has Antennas?Teridax122 (talk) 02:35, October 15, 2012 (UTC)

Hehe, nicely put dear Yao, but did any one watch the final episode of The return of Ultraman episode? How can you be so sure he didn't have tenticles come out of his arms when he was smaller or something like that?Teridax122 (talk) 07:13, October 15, 2012 (UTC)

The newer geniration tv series and movies are coming out with the old and newer Ultramen, and there's gonig to newer suits that look like the old monsters, and that is what kids to day are going to be whatching, and if the kids that come to this wiki and are going to the older pictures for the monsters the're going to lose interest. Me and Tsuru are trying to make the wiki look new and shiny with the newer pictures, and to also keep up with the other wiki that use the newer pictures, like the Halo wiki, the dragonball wiki, and the Sonic News Network. You don't have to agrea to this but if you do please send this messeage to other Users on the wiki and ask them what they think.Teridax122 (talk) 02:34, October 24, 2012 (UTC)

Hey Yao, I'm not trying to argue with you over whether Dyna is better than Tiga, that's not the point, this is Wiki right and the manner of writing on a wiki is suppose to be informative, meaning totally unbiased. I’m just saying that the way you’re saying Dyna is better than Tiga is too biased and takes away from the touch of professionalism on the page. We placed stats on the pages showing who is definitively strong then I have no problem with it whatsoever, but I’m just trying to help make the Wiki better.

Also why do remove the Standard Powers section for Dyna’s abilities, it helps reduce redundancy in the cataloging of his powers, its on Tiga’s and other Ultra pages, even if you have an issue with my other change can’t quite understand that problem. I hope we can come to an agreement.SolZen321 (talk) 02:41, November 1, 2012 (UTC)SolZen321

Well of course we're going to keep the page. It's not like gridman ever met Ultraman but we kept him. Any way, since you said you can read mandarin could you tranlate the contents of this page: Here.Teridax122 (talk) 04:14, November 3, 2012 (UTC)

Yaoyao, I have no idea what you are talking about. Goji has not followed the core principles of this volunteer wiki site, this seemed very apparent with this lastest converstion with him and Salamandora. I stepped in because I had already showed him that you can't ban users for poor grammer as shown in the "Assume good faith principle" in the Wikia basics .Teridax122 (talk) 04:13, November 7, 2012 (UTC)

If you want the fighting to stop, start following the core principles of this wiki. Did you even read the links I gave you. The Assume good faith principle clearly stats you don't ban poeple for bad grammer, and it's very clear the admins don't ban poeple because they can't speak english.Teridax122 (talk) 06:09, November 7, 2012 (UTC)

I'm going to number these pharagraphs then if have an enquiry please put the number down first then give your comment.Teridax122 (talk) 05:17, November 9, 2012 (UTC)

First Goji73 is the Youtube account Goji uses for reviewing toys as he put on his profile page.

To answer your question about fixing the edits and pages of others I sent you the giude lines of what of how the admins of this wiki should work. Again there is no banning of users because of grammer or armature mistakes period, there's no wiggle room on this, so as responsible Admins, we will endure in this and follow the steps I sent you as a deffault guide line. There for if any Admin doesn't want to do these thing they don't have to be Admins, they can just become users. The title admin is not given just to ban poeple because they don't agree with your views, we must stick with the standerd default rules of the wiki, and the title Admin isn't given to users if they will not follow the good faith principle that is nesisarry for any Admin to follow.

I don't know who did it but some one erased all the info on Ultraman Xenon, I just finished restoring it and protecting it, but in order to ovoid this problem again could you help protect important pages, like all the pages on the Ultras template and also popular Kaiju and Seijin. Thanks.Teridax122 (talk) 05:10, November 18, 2012 (UTC)

Alright, it looks fine, but changing Dyna's Profile page means we'll have to make his page a staple for all the other form changers (excluding Mebius and Zero since the're from the show mainstream). Teridax122 (talk) 06:17, November 28, 2012 (UTC)

well, sorry. i will change it

cat·e·go·ry  (kt-gôr, -gr) n. pl. 'cat·e·go·ries'1. A specifically defined division in a system of classification; a class.2. A general class of ideas, terms, or things that mark divisions or coordinations within a conceptual scheme, especially:a. Aristotle's modes of objective being, such as quality, quantity, or relation, that are inherent in everything.b. Kant's modes of subjective understanding, such as singularity, universality, or particularity, that organize perceptions into knowledge.c. A basic logical type of philosophical conception in post-Kantian philosophy.3. Linguisticsa. A classificatory structural unit or property of a language, such as a part of speech, verb phrase, or object.b. A specific grammatical defining property of a linguistic unit or class, such as number or gender in the noun and tense or voice in the verb.

Response to your last quote on Mr.Tsuru23's page

Brother Yao, I agree with your idea, they pictures are to me better, let me know if the rest of the community agrees to change all the pictures inmediately!!!!!!!

What do you mean my name is Ultra7sh

Hey mate, I know I replied 4 weeks later, but been busy with high school and stuff. Anyways, regardless your request, I don't know how to send sthings via mail, nor the shipping, nor anything else, I am not knowledgeabela bout this things, if I knew something though I will let you know ^_^

Taking it too seriously

Hi, I am Mr. X. if you want to know about me see some of my talks in Mr Phazon's user talk. All I want to say is you must cool headed. I may not know why or much about you, but try to understand the other parties side first. Don't let your rage will turn you into the 2nd Belial. If you already do that, you can start of broke the wall of Tsuru sins. I may help you destroy the wall that protects Tsuru sins. However, if YOU the one who did the false, just remember no one will sit down.

Hi, I am Mr. X. if you want to know about me see some of my talks in Mr Phazon's user talk. All I want to say is you must cool headed. I may not know why or much about you, but try to understand the other parties side first. Don't let your rage will turn you into the 2nd Belial. If you already do that, you can start of broke the wall of Tsuru sins. I may help you destroy the wall that protects Tsuru sins. However, if YOU the one who did the false, just remember no one will sit down.202.152.196.153 09:21, February 9, 2013 (UTC)

Hello Yaoyao9,I got the pictures on a Japanese website:

Retrieved from "https://ultra.fandom.com/wiki/User_talk:Yaoyao9?oldid=210315"
Community content is available under CC-BY-SA unless otherwise noted.