Hey I'm Apexz. The fact i will tell you the next episode of Ultraman Ginga, from the new video i just saw it. I will include also Ultraman Ginga : Theater Special.

For the theater special, not much i know. Thats is Three villain will appeared, Dark Zagi, Tyrant and Grand King.

Taro is not a spark doll anymore, Might be because he was not unconcionous anymore, he become Ultraman Taro itself or he wasUltra Live by Hikaru something like that.

History of the Trailer

What you could expect, The second Phase was awesome. Showing that Hikaru will use again Black King spark Doll to face Dark Galberos, and again Curse you, Kamen Rider Wizard!

Here's some pic of Special Theater, Dark Zagi, Ultraman Tiga and all i got. And about Hotsuma Raidou, Hikaru's Grandfather bow with Ultraman Taro, in my oppinion, Taro might or maybe use him as a Human Host allowing him to battle and become alive back. Who knows. 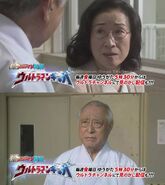 I think i know something,Taro might use him as a human host allowed him to fight maybe..?

Taro!
Add a photo to this gallery

Retrieved from "https://ultra.fandom.com/wiki/User_blog:Apexz/Ultra_Live?oldid=86091"
Community content is available under CC-BY-SA unless otherwise noted.