Hey Guys, again with some Ginga news, dunno if this were old or new, but i have to said, Did Ginga will have more than Eleven EPisode since it has more enermy that 5...? Here some pic of his enemies fighting including we saw Galberos and Ultra Geist but Red King and Antlar and Zaragas will be appeared in the series.

More news about Upcoming Ultraman Ginga, this time Alien Nackle might be use Hikaru Raidou principal of Furuboshi School as host.

Oh Boy, Now i know , Misuzu contorolling Red King in a good side using the Dark DUmmy Spark, looks like She;'s not killing Hikaru or Ginga, base on my information i gathered, she must has been looking foward to help Hikaru. after she overcome the darkness in Red King. 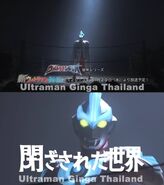 Ginga in the wrestling Place with a Cape? 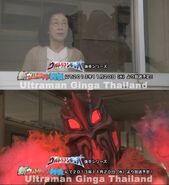 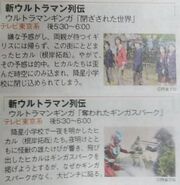 Add a photo to this gallery
Retrieved from "https://ultra.fandom.com/wiki/User_blog:Apexz/Some_News?oldid=83469"
Community content is available under CC-BY-SA unless otherwise noted.