Watching as the world progressed, the dinosaurs, who escaped extinction by burrowing underground, where finally sick of being held captive by the stones that suppressed them. They needed a leader and Ururu stepped forward. The Tyrant Lizard King observed as countless of other dinosaurian monsters attacked the Earth, including the Giras Brothers (Ultraman Leo), Neronga (Ultraman), and several saurians from the Fireman series. Finally, Ururu's plan was formed. He went to war with the human race.

Summoning his best warriors, Ururu sent them to the surface world, but time and time again, his hench saurians were defeated, until Ururu's true master, Dinosaur Satan Grottes, violently uprooted Ururu's leadership position on the top of the food chain, whipping the tyrant lizard into submission and sending him to fight the Izenborg ship by himself. Little known to Ururu and Grottes, the Izenborg's own Zen had made friends with Topura, a triceratops that left the Dinosaur Army due to injuries. Ururu, feigning his own injuries, got close enough to Zen before launching an attack, only to be attacked by Topura in a frantic frenzy.

A battle between the tyrannosaurus and triceratops raged until Ururu lifted the would be savior up and tossed him aside like he was nothing. Having defeated Topura, Ururu turned his attention to the Izenborg Super Ship. After biting it and surging it with electricity, he tossed it to the ground and began to gloat. He did it! He defeated the Human's main weapon! And in his moment of triumph, the Tyrant king began to dance, only for the Izenborg to recharge itself, launch up, and slice through the terrible lizard king's throat, beheading the saurian and causing him to explode.

In the DVD special, Ururu had appeared and terrorized an unnamed city while Dinosaur Leader, Gottes and Zombie Woman, Zobina watched the destruction. D-Force arrived on the scene with one of their ground weapons and easily took him down. Gottes and Zobina then destroyed the device just before their enemy, Izenborg arrived on to stop them. 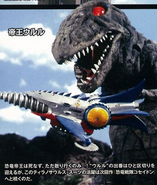 Putting on the Ururu suit.

An M1 Gon The Ururu 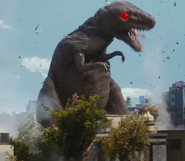 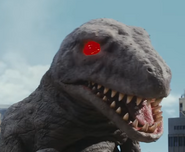 Ururu on the teaser of the Dinosaur Great War Izenborg comic.
Community content is available under CC-BY-SA unless otherwise noted.
Advertisement