None
Univerlages (ユニバーラゲス Yunibaragesu) is an race of aliens that look like jellyfishes. A single Univerlages appeared in episode 49 of Ultraman Ace.

Univerlages arrived on Earth with its spaceship and sent Aquarius in her human form to Earth while Univerlages stayed in its cloud form. Aquarius contacted Univerlages about the environment of Earth using the vase she carries which was a communicator. Univerlages thought Earth would be great as a colony for the Aquarius System and the alien told Aquarius to get ready for a full-scale battle. The Univerlages in the dark cloud told her they would wait on Earth to replenish energy for the battle for Earth. Then Univerlages turned into it's "jellyfish form" and destroyed a airplane passing by.

Univerlages' cloud form strikes lighting at Aquarius (which is actually a type of communcation) and Aquarius tells Univerlages about how foolish the villagers were and take the cult as the sign that Earth is now Univerlages' colony. After TAC skirmishes with Aquarius and TAC is confronted by the cultists, Yurkio and Captain Ryu disperse Univerlages' black cloud and reveal the alien's spaceship. TAC shoots the spaceship only for no affect and Univerlages' monster form is summoned! However its reign is short lived as Yoshimura kills it with their Laser Gun. Univerlages' spaceship is shortly afterwards downed and destroyed but the alien's final wish was to summon the monster form of Aquarius. 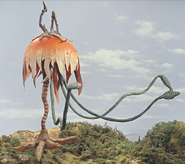