Ultraman Ace episode 52 "Tomorrow's Ace Is You!"
Unitang (ユニタング Yunitangu) was a Terrible-Monster that appeared in episode 11 of Ultraman Ace.

Unitang appeared one day to destroy TAC's radar. She brought down two TAC planes and totaled a radar dish. After she disappeared, 10 cycling women suddenly appeared. TAC wanted to watch over their leader, Aya. One night, Hokuto discovered that the 10 women were the Terrible-Monster. They controlled Hokuto's mind and prevented him from becoming Ultraman Ace. After a skirmish with Minami, The cycling girls turned into Unitang and she attempted to destroy TAC 's radar once more. Minami convinced Hokuto to become Ultraman Ace,so they transformed. Ace was taken down by the snapping claws of Unitang but he did manage to get the upper hand. Ultraman Ace split the monster into segments. However,at a nearby town, the segments reformed. Before Unitang could attack, Ultraman Ace stopped her from going on. Ultraman Ace finally killed her off with the Ultra Shower. The Terrible-Monster Is Ten Women?

Later, Unitang, Mazaron Man, Cowra, and Mazarius returned as ghosts and were combined into the strongest, final Terrible-Monster Jumbo King by Yapool. Tomorrow's Ace Is You! 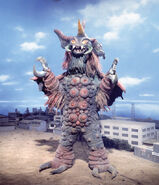 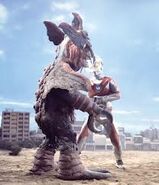 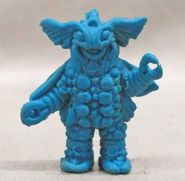