Geist is the German word for "Ghost".

The Ultraseven Geist is a black colored Ultra Warrior born from the grudges of past monsters that Ultraseven fought before, in addition to the warrior's combat data. Seven Geist had appeared thrice in the annual Ultra Hero Battle Theater! and was under ownership of various aliens depending on the stageshow: Alien Guts (fifth), Alien Endeal (tenth) and Alien Zarab (twelfth). In the fourteenth stage show, a Halfbody (ハーフボディ Hāfubodi) variant was among the combatants of Kaiser Belial to fight against Ultraseven. 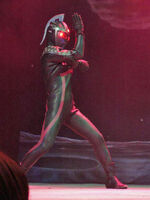