Ultraseven Arrives! (ウルトラセブン参上 Urutorasebunn Sanjo!) is the eighteenth episode of Return of Ultraman. It also marks the return of Ultraseven.

Captain Kato communicated with his college friend Kaji, the captain in MAT Station. With Kaji's wife is expecting to give birth in the next month, Kato proposes an idea of switching their position in hopes of Kaji being able to spend more time with his family. In the middle of their conversation, a space monster appeared and begin swallowing the entire space station with its stomach. Despite Kaji and his crew's attempts at counterattack, it simply absorb their lasers until the entire station is gone, taking the entire team with it and flew to Earth. Minami and Ueno dispatched in MAT Arrow 1 and Go and Kishida in MAT Arrow 2, but neither of the fighters are able to even scratch the monster. Minami and Ueno were hospitalized and Captain Kato was forced to send the bad news to Kaji's pregnant wife.

Through analysis and photos taken by MAT Arrow, Kato identify the space monster as Bemstar, a space monster from Crab Nebula that exploded in year 1054. It feeds on gases such as hydrogen, helium and nitrogen as food source. At night, Bemstar reappeared again to feed on gas tanks in a refinery. After the evacuation of civilans, MAT Arrows commenced attack but was forced to fall back when Kishida was being shot. The next day, Go went into action on MAT Vehicle when the diner he had breakfast at suddenly experiencing minor earthquake. Captain Kato departed with MAT Arrow 2 in hopes of avenging Kaji and Go transformed into Ultraman to fight Bemstar, but neither of them can literally harm the monster. Ultraman try to recharge with the sun's energy and almost dragged by its gravitational force, with Seven's timely arrival saved him from death. Seven give Ultraman the Ultra Bracelet as a means to fight Bemstar and any space monsters appearing after that. Both Ultras parted ways as Ultraman returned to Earth.

Ultraman saved Kato by grabbing his MAT Arrow before its crash landing and finally uses the Ultra Spark to slice Bemstar's limbs and head. MAT finally emerged victorious in their first fight against a space monster. Go managed to escort an injured Kato to the MAT Vehicle. Despite his injuries, Kato made it clear that he wanted to spread the news of Bemstar's death to Kaji's wife, finally being able to avenge his old friend's death instead of simply return to MAT headquarters for treatment first. 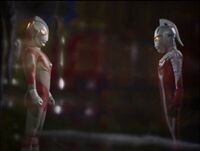