Ultraseven is the 3rd entry in the Ultraman Series

Ultraseven (ウルトラセブン Urutorasebun) is the third entry of the Ultraman Series, created by Tsuburaya Productions. The series later went on to become one of Japan's greatest fantasy TV series, with average ratings of over 36%. The titular Ultra of the series, has received more exposure than the original Ultraman due to his increasing popularity. Another season of the series was produced during the Heisei Era, called Heisei Ultraseven.

In the not-too-distant future, the Earth finds itself constantly under attack from extraterrestrial threats. To combat them, the Terrestrial Defense Force establishes the Ultra Guard (ウルトラ警備隊 Urutora keibi-tai), a team of six elite members who utilize high-tech vehicles and weaponry. Joining their fight is the mysterious Dan Moroboshi who is secretly an alien from the Land of Light in Nebula M78, Ultraseven.

In 1985, Turner Program Services commissioned Cinar to dub all 49 episodes for run in syndication.[1] Cinar produced episodes featured new opening and closing credits, eyecatches, and even new episode names. After failing to sell it to local and national stations, Turner put the tapes back into their vaults until 1994, when Ultraseven was selected for broadcast on the Toons 'Till Noon and MonsterVision blocks on TNT. The Toons 'Till Noon broadcasts received substantially heavy editing to make them suitable for the time slot, while the MonsterVision broadcasts were left completely uncut. Episodes 5-7 were missing, but instead of paying Cinar for the missing episodes, they aired all the tapes they had already. When the contract expired between Tsuburaya, Cinar, and Turner, all materials (film, tapes, audio masters) reverted to and were collected by Tsuburaya.

A movie adaptation of episode 18 was published July 21, 1968, in the Toei Manga parade.

Twenty-seven years after the end of the original Ultraseven series, Tsuburaya made a two TV specials that continued after the original story, having Seven come back to Earth, then two years later a slue of direct-to-video sequels. Each of the new episodes took place in a continuity were Ultraseven was the only Ultra Warrior that ever came to Earth.

Ultraseven travels to another world to fight off invaders who plan to cross over using a portal and silently take over the world. Ultraseven bonds with a man named Jin, an amnesiac who has a past linked to the events that are secretly conspiring.

In 2012, Shout! Factory obtained a license to subtitle Ultraseven in English, and released it for sale on their website as a physical boxed CD set, which is only available for shipping within the US and Canada. The original Episode 12, however, was not included, so the total number of episodes in this release was 48. On December 11, 2012 Shout! Factory made the set available through regular retailers. The case this time is a standard DVD keep case.

Mill Creek is also set to release the complete Ultraseven series on December 10, 2019, under the Steelbook and Blu-Ray releases. 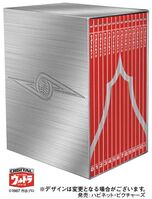 Mill Creek's Blu-Ray release
Add a photo to this gallery

Retrieved from "https://ultra.fandom.com/wiki/Ultraseven_(series)?oldid=511739"
Community content is available under CC-BY-SA unless otherwise noted.