This may not be the article you are looking for. For other uses of the word, see Ultraseven (disambiguation).

As with the other Ultra Brothers, Seven fought the deluge of monsters that appeared because of the Plasma Sun's activation. Using the powers of their new forms, the Ultras fought the monsters back until their world was safe. It was after this that the saboteurs of the Plasma Sun appeared and declared their belligerent intention before departing. Knowing that the Plasma Sun's mutagenic rays had spread all over the universe, Seven and many other Ultras flew off to combat the threat that originated from their world.

At some point in time Seven found himself in space over planet Buffalo, fighting mysterious golden UFOs. Seven used his Wide Shot but the flying dodged it and instead attacked him with a conjoined attack. Seven was knocked out and fell towards the planet surface like an meteorite striking the ground of the icy planet.

Despite turning back into his human form, Seven survived the fall on the icy planet and was found by the Navarro tribe who nursed him back to health. Discovering he had lost his transformation item, Seven was left stranded on Planet Buffalo. Seven soon started to grow close to the tribe particularly the chief and his family, who showed him their skill with a boomerang weapon made from the horns of their cattle. Seven soon learned that the people were being tormented by saucers from planet Pedan, who were searching them for the differentior element that they believed struck one of the cattle, for this they abducted the tribe's cattle.

Despite Seven's advice, the chief ran off to battle the UFOs on his beast, but was quickly destroyed, the UFOs then combined to form King Joe, threatening to destroy the village and all its inhabitants. Just as all hope seemed lost the creature the aliens were searching for appeared: Miclas. The transformed cattle battled the robot to protect its owners and kind. Despite its efforts, the creature was badly beaten and its frontal horn burtally torn off. When the robot resumed its attack on the village, Miclas took the hit and fell back, in the chaos one of the children dropped a slag of ice they had found in of front Seven, who recognized his transformation tool,

Almost immediately the ice melted and Seven went off to challenge the robot and its masters. The villagers protested but were amazed when Seven transformed in front of them. With his Ultra form restored, Seven battled the robot and while he fared better than Miclas, he soon found his strength waning. Between the overcast sky and the cold his body was not made for the environment of planet. Soon Seven was on the ground being choked. Miclas, recognizing that the red giant was there to help, spat a fireball into the air splitting the clouds and allowing Seven to recharge. Seven pushed the robot off and enlarged the fallen chief's boomerang, he threw it at King joe and while the robot dodged it, it was struck in the back and finished by Seven's Ultra Knock Tactics, along with its Alien Masters. Seven took Miclas in capsule form and then took his broken horn and created more boomerangs for the tribe to wield before taking off to return him. With the Pedan aliens defeated Seven returned home taking the wounded Miclas with him in the form of a capsule.

Seven, and Zaji were present when Alphone healed the injured Miclas. The three later departed to Earth's moon with a squadron of the Silver Corp on the orders of Father of Ultra, to retrieve and treat Ultraman, who was injured from his fight with the Baltans. Ultraman explained to them the Baltan's plans for the young planet and Seven found what would become his second Capsule monster, Windom. Seven and Alphone later visited the planet in human form, noting how much it reminded them of their home before the Plasma Sun.

Unlike his main counterpart, Seven in this continuity was born a humanlike being and possessed his own human form after his transformation along with the other Ultras. This Seven still used the Ultra Eye, sometimes destroying his shirt when he transformed in rage. 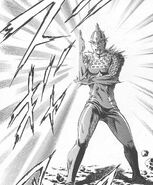 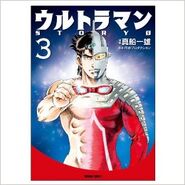