This may not be the article you are looking for. For other uses of the word, see Ultraseven (disambiguation).

"In my heart, I feel no shame for what I've done. For protecting one's loved ones is the ultimate divine rule of the universe. I fought for the Earthlings I love. I have no regrets."

―Ultraseven, at the end of I Am an Earthling.

Kazushi Takahashi (1994)
Akitoshi Otaki (1994)
Hiroyuki Okano (1994/99)
Ryuki Kitaoka (1998/99)
This Ultraseven (ウルトラセブン Urutorasebun) is from Heisei Ultraseven, taking place in an alternate reality where his titular series was the only occurrence of an Ultra visiting Earth, as opposed to the majority of the other continuities, which place him as being the third Ultra in the Ultraman Series.

At first, the entire Heisei Ultraseven franchise were solely meant to be the Ultraseven - Operation: Solar Energy special in 1994. This program was made in order to spread the awareness of Solar Day (太陽の日 Taiyō no Hi) in Japan, and was initially planned to be an original animation program. However then-producer of Yomiko Advertising, Toshihiko Fujinami decided to do a different approach. He choose Ultraseven as the image to promote the Solar Day due to the Ultra's own Protector being comparable to that of solar panels, as well as the fact that Seven tend to rely entirely on solar energy to recharge himself. Because the TV Specials contradicted a lot of elements from succeeding Ultra Series, this Seven was made into an alternate reality version of the character, alongside the entire Heisei Ultraseven being an alternate universe.[1]

The TV Specials for Heisei Ultraseven were originally meant to be ended with Seven's apparent death from explosions caused by the Alien Metron base's destruction, but his return for the 30th anniversary trilogy was suggested due to director Kamisawa wanting a continuation for the character.

Ultraseven's design has no alteration, but the character had different suits being used per each segments of Heisei Ultraseven. As revealed by the Heisei Ultra Video Complete Works magazine:[2]

This Ultraseven follows the exact same continuity as the original TV series did, while disregarding any of his future appearances in the succeeding media of Ultraman Series, such as those of Return of Ultraman and Ultraman Leo.

"He's completely exhausted and worn out. He doesn't even get time to rest. But he loves humans, so he flew all the way here from the end of the universe. He never stopped defending Earth's peace. He loves Earth even more than humans! You fool!"

30 years after his fight against Re-Pandon, Seven crash-landed on Earth after being attacked by the Alien Pitt saucer. Upon his crash landing, Seven's comatose body was protected by the TDF and UG under Furuhashi's request, having faith that his old friend, Dan, is still alive despite his injuries. While Eleking attacked the Hyper Solar System, the Alien Pitt targeted Seven's comatose body, but their attempt to kill the Ultra with solar-powered beam was interrupted by Anne's son, Dan, under their captivity. Seven was resurrected in time to fight against Eleking, wherein Hyper Solar System managed to weaken the monster for him to destroy it using the same tactic in his past fight. After saving Anne's son and killing the Alien Pitt, Seven would left for the outer space again, this time as the spectators thanked him for his assistance. Ultraseven - Operation: Solar Energy

After defeating an Alien Metron in a remote planet, Seven chased the alien's two remaining brethren, a pair of siblings who decided to take advantage of Earth's deteriorating environment for their own invasion purposes. Seven took the form of an elderly Dan Moroboshi, but decided to avoid interaction with UG as possible, especially any means of interaction with Furuhashi. Fighting against the remaining giant Metron, Seven regained his access to sunlight energy through Furuhashi's effort and managed to put an end on Metron's invasion plan on Earth. However, the victory came at its price as Seven was surrounded by explosions and seemingly disappeared from the scene. Ultraseven - Planet of the Earthlings

Seven survived the explosion from Metron's base, but the incident left him as an amnesiac Dan Moroboshi, taking refuge under the Murata family while taking a job at an archaeological site. A string of incidents perpetrated by Alien Viyell led Dan to regain his memories and transformed into Seven once again to stop his invasion plan on Earth. Lost Memory

Seven continue to assist the new batch of Ultra Guard in against the threat of Alien Guts, Sulfas and Banderas. He also occasionally switched places with Masaki Kazamori to ensure his participation a secret. Seven departed from Earth after a reunion with Furuhashi. Eternal Earth Betrayal Sun

Seven returned several years later when Kaji proposed the Friendship Plan to TDF. Upon arrival, he was too late to save Furuhashi from death and was even forced to arrive on Earth to intercept the Alien Valkyrie's attempt at discrediting UG. Due to Kazamori sustaining heavy injury in order to force the alien out of his body, Seven decided to save the young man by placing his comatose body in a Capsule Kaiju. For an entire year of Kazamori's recuperation, Seven alternated through both his disguises as Dan Moroboshi and Masaki Kazamori, the latter was used as a cover to work alongside the Ultra Guard in their fight against the alien invaders. Legends and GloryI Am an Earthling

A year after the Valkyrie incident, Seven's disguise as Kazamori was exposed to TDF by a Nonmalt who sought to uncover the secret behind the Omega File. "Kazamori" was rescued by the Ultra Guard members after they decided to rebel against Kaji's cronies and the Ultra unleashed his Capsule Kaiju to stall Zabangi. After passing through Kaji's defenses, Seven reunited with a revived Furuhashi, who confirmed that humanity's ancestors were invaders who expelled the Nonmalts (the true Earthlings) into the depths of the ocean. Through Furuhashi's reassurance to have faith in mankind, Seven killed Zabangi in an act of interfering a civil war between a planet's native species. After his deed was done, Seven returned a fully healed Kazamori to his teammates and reunited with Furuhashi for the last time. Despite Furuhashi reassuring Seven that he has his place on Earth, the Ultra decided to return to Nebula M78 to face his punishment. I Am an Earthling

Branded a criminal by his own kind, Seven was to be exiled to a small planet in the Horsehead Nebula in the constellation of Orion, a planet which would effectively serve as his prison.Dark Side However, unbeknownst to anyone, a trace of Seven's essence was in Kazamori's body, remaining dormant until five years later when Alien Garut started to put his plans for Earth domination into motion. While imprisoned, Seven was able to utilise Muon particles to establish a faint contact with Kazamori, who began to exhibit superhuman abilities on his own. Perfect World

Through Satomi's spirt and the Dragonic Saucer's help, Seven was rescued from his prison to bond with Kazamori as his host. Neverland He first fought against Neo Pandon and rescued the Plant Life form from being hunted by both TDF and aliens alike. Innocent With the knowledge that Alien Garut had been tampering with the Akashic Records, Seven killed the alien and his monster companion Gaimos. Seven's merger with Kazamori had become permanent, but the duo resolved to protect the Earth at all costs. Akashic Records

Since this Ultraseven has the same history as his original self, he is also presumed to share all of the attacks demonstrated in his titular series.

Like in the original series, Dan Moroboshi applies the Ultra Eye to his face by planting it over his eyes like a pair of eye-glasses without temples (which it resembled), spinning lights would appear in the lenses, and Ultraseven would emerge seconds later. This transformation pose is also repeated with Masaki Kazamori (either as his disguise or the real person himself).

Dan Moroboshi transforming in Planet of the Earthlings. 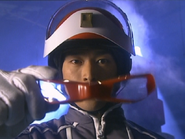 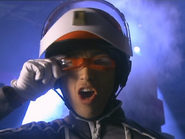 Ultra Eye is placed on his face 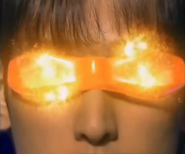 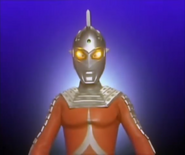 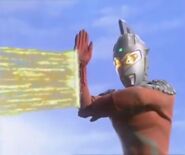