Alive in the form of Nexus/Noa

Hiroshi Maruyama
Ultraman the Next (ウルトラマン・ザ・ネクスト Urutoraman za Nekusuto), or simply called 'Ultraman' in his world, is the devolved form of Ultraman Noa that he reverted into while he was chasing Beast the One upon entering Earth's atmosphere. In this form many of his powers were locked, which he later regained as time passed. The Next was also made as a remake of the original Ultraman, as a result he also known simply as "Ultraman" in his universe, with "The Next" being his code name from the military.

The Next's name is meant to symbolize that this Ultra is the start of the Next Generation of the Ultraman Series.

Arriving on Earth and merging its life with F-15 pilot Shunichi Maki, the being slowly grew within him. After the Japanese self-defense force lost the One, they brought the man under custody, believing he could be the one to lure the beast back. The plan worked, but The One had increased in power and size by absorbing a swarm of lizards right before their eyes. However, trapped in a cell beneath the floor, Maki began to change. Blowing the door off with a burst of light and emerging, the human was swatted like an insect and sent flying into the wall where his change began to go full force.

Maki transformed into the Next, a humanoid warrior from the stars. The two titans battle raged within the warehouse, but when the creature threatened Sara’s life, Next dove in front of the tail, taking several whips before forcing the creature into retreat where it broke through the wall and vanished into the wilderness.

When Sara and Maki met up with the creature, it lashed out again after tricking Sara. The fight between the two was once again raging, but when it became evident that he could not defeat the hero, the beast absorbed a swarm of rats and grew into an even bigger form. Once the monster escaped, it began to attack the city. By the time Next came out of the hole, buildings were burning and falling. One building was about to fall on a young girl and her mother.

Rushing toward the falling building that was going to crush the young girl and her mother, Next evolved into his next form. The super being propped himself under the structure and held it up long enough for the pair to escape, but The One saw this and attacked. The battle for the city, and possibly the world, started yet again. When the creature began unleashing balls of energy from its jaws, the Next took to the skies.

After absorbing a flock of crows, the One followed vigorously. The two warriors began to dog fight, dodging and attacking one another until the monster used its tail to hold the giant still and pull him in. It began to bash the hero and feed on his energy until the air force arrived, attacking the monster and allowing Ultraman to escape and hit the fiend with two energy cutters, severing its wings and sending the beast falling to the ground.

Once landed, the red and silver giant had little trouble, using his most powerful attack, the Evol-Ray Schtrom, the space beast was vaporized. After this Ultraman honored Maki's request to fly with his son and revived his life force. However as a result Ultraman was forced to go to sleep to regain his energy back. ULTRAMAN

Many years after the Next finished his battle with the One, Ultraman awoke from his slumber bearing his fully developed form, Nexus. In this form he merged with other humans, and recovering some of his powers. After he merged with Kazuki Komon, he obtained all of his powers, and became Ultraman Noa, his true form, and defeated his sworn enemy, Dark Zagi, and then stayed on Earth to defeat the remaining Space Beast, with Kazuki Komon as his host.

The Next is seen as one of the Ultras seen fighting the deluge of monsters during the Dark Spark War, being transformed into a Spark Doll by the Dark Spark at the war's conclusion. Unlike his prior appearance, he was fighting in his Anphans form as a giant like the other Ultras.

Unlike most Ultras and his succeeding form, the Next doesn't use any manner of device to transform. Maki transformed by pure will although the first time may have been due to the blow he received and the light was trying to save his life. Afterwards he transformed by his own volition. The process begins with his eyes glowing red and the Next's energy lines appearing all over his body as it glows, the light turns blue and he transforms. The blue also appears when he changes back.

Anphans (アンファンス Anfansu) is the Next's first form, it has all the basic powers attributed with Ultramen. It was the result of Maki's and Ultraman's incomplete merger and Maki's unpreparedness. Afterwards it served as the Next's default mode as Maki fought in it against the One's third form, unlike other Ultra hosts Maki fought in Ultra form but did not have Ultraman's knowledge to guide him meaning he had to discover all of his abilities as he went along. This form is said to be incomplete, implying that unlike normal Ultra forms, this one only exists simply as a result of Maki and the Next's unfinished merger. The Next's abilities in this form can be seen as underdeveloped.

Junis (ジュネッス Junessu) is the Next's evolved form, it offers greater strength and speed to that of Anphans. The Next retains all the powers of his previous form but they are now more powerful versions of his prior form's. His Stratos Edge blades have evolved to become more powerful. It is the precursor of the Armed Nexus later seen in Nexus. This form is first used in the last battle against the One when he grew to his second last form and rampaged in the city. Maki transformed while increasing his size and using acceleration to save a little girl and her mother from a falling building. It is in this form that Maki and Ultraman complete their assimilation with each other, only to separate shortly after the battle was won.

The Next in his Junis form appears in this game as one of the secret playable characters. To unlock him, the player must complete Battle Mode using Ultraman Nexus Junis form.

Ultra Hero Series Ultraman The Next is a 6-inch figure based on his Junis form in the climax, and he features 3 points of articulation on the arms and the waist.

This Ultra Hero Series Ultraman The Next figure is based on his Anphans form seen in the first half of the movie.

This Ultraman The Next (Anphans) is a redeco of the titular mold, featuring colorless translucent plastic with some clear yellow sprays to represent his first appearance where he communicated with Maki. This figure is only available at Lawson, where customers must purchase it along with advance tickets of the movie.

Released as part of the "Hyper Hero Real Action Doll Collection" line by Ootsuka Planning, this action figure of Ultraman The Next features an articulated frame (decoed in red) with wearable body parts of the Ultra himself.

3 months later, the Anphans version of The Next is also available for the line.

The Next first appearing 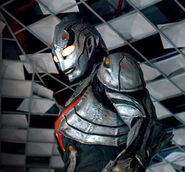 The Next vs The One

The Next vs The One 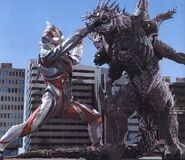 The Next final battle against The One

The Next takes flight

The Next charging his beam 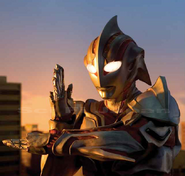 The Next after his victory against the One 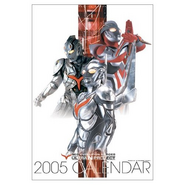 The Ultra N Project on a poster

Design sketches for the Next 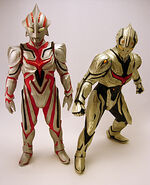 The next Junis and Anphans toy

Maki before transforming into the Next 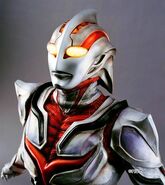