"Kaiser Belial has arrived! Zero, face him with the light!"

Ultraman Zero: The Revenge of Belial

Having survived his battle against Ultraman Zero from the previous film, the evil Ultraman Belial, now known as Galactic Emperor Kaiser Belial has taken up a new conquest for universal domination. Having gained two allies in his conquest, as well as creating millions of robot servants known individually as Legionoids and the Darklops, Belial attacks the Planet Esmeralda. Taking the planet hostage and brainwashing the guardian of the planet, Kaiser Belial is victorious in capturing the planet.

Back in Nebula M78, the Land of Light is attacked by one of Belial's robot carriers, containing three Darklops. Luckily Ultraman Zero shows up along with Ultraseven and destroys the Darklops before they can get away. Tracing the energy where the Darklops came from, the Ultras come to a conclusion that the Darklops came from an alternate universe and therefore are unable to come together to stop them. Ultraman Zero obligates to go by himself to stop Belial, and so the Ultra Brothers and all of the citizens create a travel sphere to send Ultraman Zero to the universe that Belial is terrorizing. Before departing however, Ultraseven gives Zero a newly crafted item known as the "Ultra Zero Bracelet", an item that acts as a backup power source should Zero run out of energy when things are in a dire state. It can be used only three times.

On Planet Esmeralda, Belial's Legionoids Army is causing destruction and attacking a group of rebels who are trying to attack. Nao dan Run, the two brothers who pilot a vehicle are battling against the Legionoids. When Run tries to save Nao from falling into a volcanic pit, Ultraman Zero arrives and notices the situation the two are in. The bracelet proved to be useful as the suns in that universe are incapable of recharging Ultra beings. As a result, Ultraman Zero uses Run's body as his host and shortly after joining, Zero easily takes out the Legionoids. However, in doing so Ultraman Zero is forced to assume the identity of Nao's brother, Run, to both keep the heavily wounded. Run alive as well as to conserve energy.

After greeting Nao and telling him of the situation, Zero (as Run) learns that Belial is harvesting the universe for Emeralds, which can be converted into raw energy. Belial is planning on using mass quantities of the emeralds' power in his conquest of the universe. Nao believes that an artifact known as the "Shield of Baradhi" is the only thing that can stop Kaiser Belial. Shortly after the truth is realized, the Legionoids attack Run and Nao again but are stopped after the two brothers stow away on an unknown vessel that blasts off into space.

Upon investigating, Run and Nao meet the princess of Esmeralda, Princess Emerana. They also learn that the ship they are flying on is sentient and is called the "Star Corvette Jean-Bird", a spaceship with artificial intelligence that is passed down through the planet's royal family. After being spared from Jean-Bird's memory wiping process. Run and Nao make quick friends with Princess Emerana and after Run reveals his identity as Ultraman Zero, the trio and Jean-Bird agree to stop Kaiser Belial's conquest by searching for the mythical Shield of Baradhi.

Along their way, the heroes meet the Pirates of Flames, a wily crew of hostile pirates that sail throughout a galaxy known as "The Space Nitromethane Sea". With them is their more hot-tempered and feisty bodyguard, Glenfire. At first identifying the Jean-bird with hostility, Run becomes Ultraman Zero for the first time to try and reason with the crew of Pirates. Shortly after, Glenfire and Ultraman Zero battle to prove Zero's innocence, with the fight ending in a standstill and Zero gaining the Pirates' and Glenfire's trust. Suddenly the crew are attacked by Kaiser Belial's Squadron of Legionoids, lead by one of Kaiser Belial's generals, Darkgone. Outnumbered and overpowered by Darkgone's squadron of Legionoids, Glenfire provides information about the whereabouts of the Shield of Baradhi to Zero and proceeds to agitate the mass quantities of Nitromethane with his fire abilities and causes a massive explosion, destroying all the Legionoids, scares away Darkgone, and seemingly killing Glenfire in the process.

Now with the location of the shield revealed, the heroes head off to the 2-D Planet Mirrors. There they meet another bodyguard to the planet and the shield known as Mirror Knight (who was corrupted and brainwashed by Kaiser Belial, as seen at the start of the film). Run transforms into Ultraman Zero for the second time and proceeds to battle with the corrupted Mirror Knight and in the process, expels the evil energy from within Mirror Knight, restoring him back to his senses. Redeemed and grateful, Mirror Knight joins the heroes in their journey and informs them of the Shield of Baradhi's location below the planet's surface.

Upon reaching its location, the Shield of Baradhi is revealed to be a statue known as "Noa" and a trinket around Nao's neck is all that is left to complete the shield. However, in placing the final piece to the shield, the shield begins to disintegrate into sand as a result of time passing for centuries, shocking and saddening the heroes for their journey being wasted. Suddenly, the planet is attacked by another one of Kaiser Belial's generals, Iaron, who proceeds to destroy the Planet of Mirrors with the help of several of Belial's ships. In the ensuring chaos, Mirror Knight is defeated and Run is separated from Nao and Emerana and falls unconscious just before attempting to transform into Ultraman Zero for the third and final time.

Awakening, Run finds himself inside of Belial's massive vessel that is still attached to the planet of Esmeralda and is confronted by a scarred and vengeful Kaiser Belial. Reveling in his "victory", Kaiser Belial reveals that he will send thousands of Darklops to attack the Land of Light out of revenge for what happened to him in the past. Run watches in horror as the Ultras are beaten by Belial's forces but is overjoyed when he learns that Nao and Emerana have survived the destruction from before. Also surviving from the destruction was Mirror Knight, who emerges and frees Run so that he may transform into Ultraman Zero. The final battle between Ultraman Zero and Kaiser Belial then proceeds and the two battle to a standstill. However, Kaiser Belial unleashes his Deathcium Beam and defeats Ultraman Zero before fleeing.

Meanwhile, Iaron and Mirror Knight face off in Kaiser Belial's headquarters and Darkgone faces off against Jean-Bird, who is running out of power. With no other option, Emerana sacrifices herself to fuel Jean-Bird with her own Emerald energy by locking herself into his main engine, allowing Jean-Bird to transform into his more humanoid robot form known as "Jean-Bot". With Nao's help, Jean-Bot destroys Darkgone and Mirror Knight is victorious in killing Iaron as well.

Suddenly, Ultraman Zero finds Kaiser Belial standing atop a mountain of Emeralds he had harvested from planets and Kaiser Belial proceeds to absorb its massive energy qualities, transforming Belial into a towering monster known as Arch Belial. Now physically towering and unstoppable, Arch Belial overpowered and tortures Zero as Mirror Knight and Jean-Bot are unable to stop him. Miraculously, Glenfire returns and rescues Ultraman Zero, as well as reveals that he and the Pirate of Flames also brought along help in the form of the Planet Mirrors army and Esmeralda's royal guard, whom altogether hold off Belial's Legionoid's and ship fortresses. Arch Belial however intends on destroying Zero and Esmeralda with his enhanced power. Ultimately during the battle with Belial and having all energies in his bracelet used up, Zero's strength is spent and finally dies from exhaustion.

With Belial gone for good, tranquility returns to the universe. Princess Emerana reveals to have survived using her energy to power Jean-Bot, the Ultras back in M78 are revealed to have not only survived but has also stopped Belials forces as well, and Ultraman Zero separates from Run's body, allowing him to live a normal life with Nao again. Ultraman Zero proceeds to head back to his home universe, but has a change of heart when Glenfire, Mirror Knight, and Jean-Bot urge him to stay. Thus, Zero forms "Ultimate Force Zero" out of the allies and friends he had made along his journey and Zero decides to stay with the group after all. 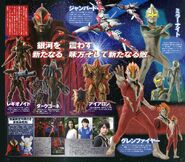 Belial and his army

Darklops Zero at the Land of Light

Glenfire about to fight Zero

Zero about to fight Glenfire

Mirror Knight after Zero cleansed him of Belial's darkness