"Light cannot defeat darkness. For that sake, I will show you!"

"His Excellency's soul has obtained the ultimate body. No one can stop him now. Would you like to come and watch the beginning and the end of this universe?"

After Ultraman Zero clashed against Kaiser Darkness and defeated him, Belial's soul left the Armored Darkness it was possessing, and went inside Zero to possess him. Now using the body of his arch nemesis, Belial had gained more power than he ever had by himself. He then proceeded to kill every member of the Ultimate Force Zero and destroy the Mighty Base. Now unopposed, Zero Darkness, or rather, Belial, could do as he pleased.

However, the spirits of Zero's fallen comrades had reached out to Zero from within, and gave him the strength to exorcise Belial's spirit from his body via the use of his new form Shining Ultraman Zero. With that, Zero Darkness was no more. Ultra Zero Fight

Zero Darkness was created by Ultra Dark-Killer using the energy from Ultraman Zero drained through the Dark-Killer Zone as a demonstration of darkness triumphing over light. This copy was sent to fight against the intensely drained Zero and Ultrawoman Grigio before the latter musters her strength to resist the twisted doppelganger and recharge her brothers. Zero Darkness joined his creator in fighting Ultraman Ruebe, where the Super Ultra shrugged off its Wide Zero Shot and retaliates with his Ruebe Vortex Buster. The beam sends Zero Darkness backwards before he exploded. However, Ultraman Tregear revives him and Dark-Killer, the latter growing to gigantic size. Geed, Orb, X, Victory and Ginga lend Zero their energy, allowing him to assume Beyond without Leito's help and finishes his doppelganger off with the Twin Giga Break. In a desperate attempt to gain advantage over the New Generation Heroes, Dark-Killer recreated Zero Darkness and the other three Darkness warriors, only to consume them and grow even larger. Ultra Galaxy Fight: New Generation Heroes

As Zero Darkness is initially a possessed Ultraman Zero, his body features are none the different from the former, with his coloration themed after Belial.

Belial tells the Ultimate Zero Force that Zero was possessed 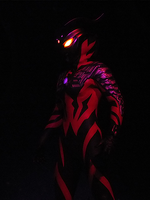 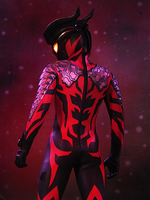