"You're so good with that flute, Tohru. Whenever I hear you play it, it just fills me with strength!"

Keiji Hasegawa
Koichi Toshima
Ultraman Zearth (ウルトラマンゼアス Urutoraman Zeasu) is one of the Ultras hailing from the Land of Bright (ピカリの国 Pikari no Kuni lit. Land of Sparkles) in Nebula Z95 (Z95星雲 Zetto Kyūjū-go Seiun) (a parody of the Land of Light in Nebula M78). He is featured in two eponymous films, Ultraman Zearth 1 and 2. Though prone to falling under the effects of his anxieties, resulting in times when his strength is severely impacted, Zearth is a skilled fighter with a remarkable set of abilities that place his strength as being on par to or greater than other Ultras.

"Zearth" comes from the word "zenith", which means "the highest point" or the "height" of an aspect of a given item, and "Earth".[1]

One of Zearth's most defining characteristics is his strong belief in maintaining cleanliness, which manifests as germophobia on occasion; Zearth will avoid dirt at all costs, to the point that he paused his training to clean his hand after he accidentally got it dirty while practicing his beam techniques. Zearth is also aware of his own limits, and though he is deeply concerned and afraid of fighting opponents stronger than him, he tries his best to continue to get stronger for the sake of the Earth.

An Ultraman from the Land of Bright in Nebula Z95, Zearth came to the planet Earth to defend it from the forces of evil, creating the human identity Katsuto Asahi, a member of Mydo, an Earth defense team that used a gas station as their secret base. Due to his fear of dirt he was placed in the lowest position in the team, the janitor. His occupation as a janitor appealed to him, however, as his germophobia meant that he kept the base sparkling at all times. The fact no one took him seriously didn't bother him either, since as he was not allowed to go out on missions, it gave him the ideal opportunity to transform out of sight. When the dreaded Cotton-Poppe attacked Japan, Zearth transformed to practice in the Japanese countryside while Mydo searched for the monster. During Zearth's practice, He got dirt on his hand while training, desperately washing it off. Unknowingly, Zearth had let the evil Alien Benzene know of his phobia. Soon the alien used this to discover the truth about Katsuto and tormented him, showing up at Mydo's base in his own human form to gloat over Zearth's fear.

Benzene soon captured a group of children and Zearth's love interest with the intention of tricking Zearth into detonating Cotton-Poppe with his beam, releasing enough energy to blow the Earth to pieces, allowing Benzene to plunder the wreckage for all the gold he could carry. Mydo caught up with Zearth and warned him of the scheme. With an energy barrier set by Benzene blocking him, the only way to get to the hostages was to cross a huge pool of tar to rescue them.

Zearth tried to cross the lake, but his phobia manifested, and he rapidly began to grow weak. Beset by his fear, Zearth's Color Timer blinked rapidly as he continued to lose his strength, and as he disappeared beneath the surface of the black liquid, it seemed that Zearth was about to die. Fortunately, Mydo and the children cheered for the hero, giving him the strength to force his way past his own fears. His love interest remembered Katsuto's words of how he felt stronger by hear her flute played with all her heart.

With his energy restored, Zearth erupted from the surface of the lake at full power, easily thrashing Cotton-Poppe while keeping Benzene at bay. He eventually knocked out Cotton-Poppe with the Zearth Knee Strike, then used the Super Zearth Kick to send Benzene flying into outer space. With Cotton-Poppe incapacitated, he took the monster into an orbit high above the Earth where he destroyed it safely using the Spachouchoura Beam. Meanwhile, Benzene drifted through space, with both his body and his pride hurt.Ultraman Zearth

Not long after the defeat of Benzene and Cotton-Poppe, Benzene's wife, Lady-Benzene arrived to try her luck. Sending her underling Ultraman Shadow to attack the hero, he was ambushed in Antarctica, easily being pummeled and being given a bloodshot eye. Finally, he was struck by the Shadolium Beam, which due to his fear, overwhelmed his own, knocking him out. The battle left Zearth emotionally crushed and unable to fight due to complete terror of Shadow. But, after receiving a message from his father, as well as a capsule monster named Miraclon, Zearth decided to train and become powerful enough to face the evil android. But time wouldn't allow him to gain enough training before the evil Ultraman reappeared in the city.

As Zearth was still yet to overcome his fear of Shadow, the Ultra sent his capsule monster, the heroic Miraclon, to fight for him. However, while Miraclon defeated Shadow's capsule monster Darklar, Miraclon was pummeled by Shadow, forcing him to be recalled, allowing Shadow to capture the city for his mistress, including Katsuto's love interest. After a great deal of training, Katsuto regained confidence and transformed into Ultraman Zearth to battle his doppelganger. The two collided in an epic battle in Shadow City, Lady-Benzene's base. Zearth's training allowed him to overwhelm his nemesis, finally sending Shadow plummeting from the sky with his newly developed Ultra Heel Drop, damaging the robot's head, revealing the circuitry inside and seemingly defeating Shadow.

However, Lady-Benzene commanded Shadow to rise again, recharging him - the battle was not yet over! The two fired their finishing beams against each other, which locked. While Zearth appeared to have the upper hand, Lady-Benzene boosted Shadow's power, and the wicked machine began to overpower Zearth. With the voices of millions chanting behind him, Zearth managed to unlock even more of his strength, and switched to the mighty Cross Spachouchoura Beam. The attack easily cleaved through Shadow's beam, finally slamming into his body and blowing the robot apart. After the battle, Lady-Benzene appeared, congratulating Zearth for defeating Shadow but telling him it was far from over and she'd be back to conquer the Earth before she left in a shower of golden particles. Zearth restored the minds of all the enslaved humans, and sent them home before leaving himself, with newfound inner strength he would forever be the Earth's protector should the people of Benzene try to attack the planet again. Ultraman Zearth 2: Superhuman Big Battle - Light and Shadow

Ultraman Zearth will make an appearance in the third part of the Ultra Galaxy Fight series.

Zearth's transformation is the same in both movies. Katsuto Asahi brushes his teeth with his special toothbrush and raises it into the air, similar to how Hayata used the Beta Capsule. In the first movie, a typical rise was shown while in the second film, the rise scene was given a transformation effect in real-time, with Katsuto turning into Zearth in a tower of light and then flying off into the sky for his showdown with Shadow. Zearth's transformation item in the first films was the Pikari Brush, which was a white electric toothbrush that he kept in his top pocket. In the second film, the second Pikari Brush was red and yellow and resembled his body markings.

Zearth gets dirt on his hand while training

Zearth's fear of dirt means he has to clean his hand off, revealing his phobia to Benzene

Zearth wades through tar with his Color Timer blinking

Zearth with his eye damaged

Zearth ready to fight against Shadow

Zearth with his mouth open 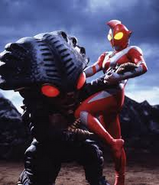 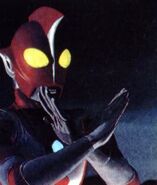 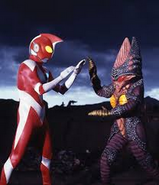 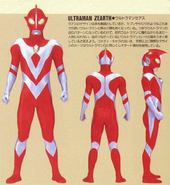