"An unknown space fighter is on Earth. There are 4 of them. I leave Earth to you."

―Ultraman Xenon to Ultraman Max before he leave, Zetton's Daughter

Hiroshi Maruyama
Ultraman Xenon (ウルトラマンゼノン Urutoraman Zenon) is Ultraman Max's superior. He arrived to help Ultraman Max when he was in danger and the one who gives Ultraman Max the Max Galaxy.

As Ultraman Max was about to be killed by Zetton, Ultraman Xenon, Max's superior from Nebula M78, appeared in a red giant ball like Max did when he came to Earth. Xenon held Zetton off and even used the Xenonium Cannon to keep him at bay, but it was blocked by Zetton's Zetton Shutter. Ultraman Xenon then summoned a new weapon from the sky to use against Zetton, but he was attacked by Zetton and the weapon attaches itself to Max's right wrist. Ultraman Max then uses the new weapon known as the Max Galaxy to destroy Zetton. Xenon told Max that Zetton was one of the five monsters Alien Zetton was using to conquer Earth and would have to deal with four more. Xenon flew back to M78, trusting Max with his assignment. Zetton's Daughter

Xenon returned later in Earth's orbit once Max destroyed Giga Berserke and they went back to M78. Hold On To! Future

After Ultraman Belial was freed, he went towards the Land of Light, after arriving, he shows Ultraman Taro was defeated by him. Ultraman Xenon was seen alongside Max and Neos when engaging Belial in combat. Max tried to attack Belial as the evil Ultra was pinned down by Ultraseven 21 and Neos, but he was kicked in the gut, sending him flying and knocked out for the duration of the fight. Even after all the long battles, they all were defeated by Belial, and when Belial took the Plasma Spark, all the Land of Light was frozen, along every Ultra. After Ultraman Zero defeated Belial and recovered the Plasma Spark, every Ultra went to listen to Ultraman King's speech. Mega Monster Battle: Ultra Galaxy Legends The Movie

When Zero was leaving the Land of Light, every Ultra gave him energy and power. Among them, Ultraman Max and Xenon are seen. Later, after Belial sent his Darklops army to the Land of Light, every member of the Inter Galactic Defense Force went and fought against his army, destroying it in the end. Xenon as a member of the Defense Force, was also in the field of battle. Ultraman Zero The Movie: Super Deciding Fight! The Belial Galactic Empire

Shortly after Ribut reversed the effects of Max's Gudis Cell infection with the artificial antibodies developed by Hikari and Sora, Maga-Orochi emerged from its egg, having not gathered enough energy to evolve further into its Magatano-Orochi form, yet nevertheless was a significant threat to the two Ultras. Though Max was clearly in no state to battle Maga-Orochi, having been weakened by his ordeal and with his energy at a critical level, he stood up and prepared to fight. Fortunately, Xenon made his presence known by sending Max the Max Galaxy, then by recharging his energy, before finally arriving on the scene. Together, Ribut, Max and Xenon teamed up against Maga-Orochi, with Xenon weakening the Lord Monster enough so that Ribut and Max could finish it off. Ultra Galaxy Fight: The Absolute Conspiracy

Ribut and Sora were later dispatched to the Galaxy Rescue Force. One day the two returned to Land of Light where they met with Xenon, who offered to spar with Ribut. After the match, Xenon and Ribut talked about how the former saved the two by replenishing Max's energy in the battle with Maga-Orochi, to which he revealed that he was only able to arrive at the last minute due to the Max Galaxy's long charging time.

Ultraman Xenon participated in the Dark Spark War but this time he fought not only alongside with the Ultra Brothers but, with the other Ultras seen so far and their allies against the forces of Evil. While in the midst of battle, Dark Lugiel appeared and turn every Ultra alongside their allies, monsters and aliens into Spark Dolls. Just as the war about to end, an unknown warrior appear and faced Dark Lugiel but like the others he also turned into a Spark Doll but he was kept within his Ginga Spark and fell alongside other Spark Dolls. It is assumed that like all other Spark Dolls, Xenon fell to Earth. Town of Falling Stars

After Ginga defeated Lugiel, Xenon is presumed to have returned to his original form and returned home in the form of a ball of light along with the other Spark Dolls. Your Future 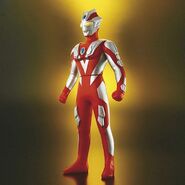 Xenon calling forth the Max Galaxy. 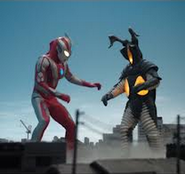 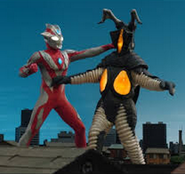 Xenon seen in the end of the series.

Max and Xenon flying back to M78

Xenon along with Ultraseven 21 and Neos fighting Belial 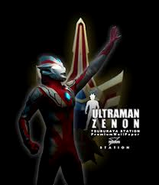