Masayuki Gotoh
Shoma Muto[1] (Trigger Dark)
Ultraman Trigger (ウルトラマントリガー Urutoraman Torigā) is the titular Ultra Hero of the series Ultraman Trigger: New Generation Tiga. He is an ancient Ultraman who once fought against darkness 30 million years ago and was revived in the modern era after his long slumber.[2][3]

According to director Koichi Sakamoto, Ultraman Trigger is designed to resemble American comic book superheroes, citing the evolution of their costume designs over the years, while at the same time trying to turn Trigger into an Ultra worthy of the image of Reiwa Era. The decision for Trigger's Type Change to resemble Tiga is that aside from adapting his predecessor's elements, it was also an attempt at distancing past Ultra's ability to assume new forms by incorporating their predecessor's powers. His use of Circle Arms is an inherited element from his New Generation Heroes predecessors, but Sakamoto also added that said weapon will play an important plot in the future.[4] Suit modeling of Trigger's Type Changes were made to ensure that each forms has their distinctive attributes; Power Type is made to be muscular, while Sky Type is portrayed as stylish.[5]

In a similar manner to Ultraman Tiga's Dark form, Trigger Dark is predominantly gunmetal grey in color, though he largely lacks any other colors in his design, with the exception of gold highlights on his ankles, thighs, around the top of his head and on the left side of his chest, next to his diamond-shaped Color Timer. Trigger Dark's armour is roughly textured, and he has two pointed extensions rising out of his shoulders. His shoulderpads and chestplate are asymmetrical.

"It wasn't just three Giants of Darkness who fought Yuzare?! [...] That giant's name is... Trigger!"

30 million years prior, Trigger was originally the strongest and fourth member of the Giants of Darkness, as well as Darrgon's sparring partner and Carmeara's lover. His past as a dark giant was originally unknown and recorded on a hidden part an ancient stone tablet that depicted Trigger's battles against the Giants of Darkness. Wavering Heart He and the other Giants of Darkness captured Yuzare and took her to an altar to open the gate to the Eternity Core. Under Carmeara's instruction, Trigger Dark was the first of the Giants of Darkness to approach the object. Before he could do anything to it, Kengo Manaka, who had traveled back in time through a vortex, entered Trigger's Inner Space and to convinced him to turn to the light and fight for everyone's smiles. Trigger Dark became Ultraman Trigger, and banishing his former comrades into deep space. Trigger then went to sleep in an upside-down pyramid ruins on planet Mars, and was forgotten to time. His stone statue was located on the bottom floor, while the Circle Arms was on the top floor.

Revival of the Ancient Giant

In the present day, Trigger Dark frequently appeared within Kengo's recurrent dream, in which Yuzare gave the young man a cryptic message, before Trigger Dark would appear, shrouded in shadows. Connection of Light In one instance, Kengo dreamed himself into the Ultra-Ancient era, witnessing the Giants of Darkness destroying the ancient civilizations from Trigger Dark's perspective. For Smiles

Trigger's ruins and petrified weapon were discovered by Reina Manaka and her team, who had been investigating there. Eventually, starting with Carmeara, the Giants of Darkness revive in the modern era. Kengo Manaka, a botanist on Mars, inherited the power of light from Ultra-Ancient times. Trigger's light flowed into a blank GUTS Hyper Key, allowing Kengo to become one with Trigger in the ruins to fight against Golba and Carmeara when they attack the ruins. Connection of Light[2][3]

Ultraman Z and his human host Haruki Natsukawa were brought to Trigger's universe by Bullton while chasing an Alien Barossa who stole King Joe STORAGE Custom. Haruki's Z Riser was damaged by Barossa and a Baby Zandrias tried to steal Haruki's Ultra Medals. GUTS-Select discover Haruki while investigating King Joe, and while he bonded with Kengo over their experiences as Ultramen, Akito transferred Z's power into a GUTS Hyper Key and lent a GUTS Sparklence to Haruki, allowing him to transform into Z Original. When Alien Barossa grew into a giant, Z and Trigger teamed up to defeat him, recovering Z's Ultra Medals soon after. Inter Universe

With the Z Riser still broken, Akito transferred the Ultra Medals' power into GUTS Hyper Keys, allowing Z to access his other forms, which he did against Dada PDO-3, who had hacked into King Joe. After the battle was over, Beliarok informed Z that they could go home by cutting a hole in space and time. Kengo bid farewell to Z and Haruki as they left, bringing the broken King Joe with them. The Propagating Invasion

Cameara attacked Trigger and performed her Curse of Darkness on him, causing his light to drain away. In desperation, Kengo fired the Zeperion Beam at the dark vortex above him, and somehow caused a time rift to open and pull him 30 million years into the past. While he met with Yuzare and the Giants of Darkness, he also saw Trigger Dark, and attempted to convince him to turn to the light and fight for everyone's smiles. In the present, the lifeless body of Ultraman Trigger rose up. Now drained of light, Trigger Dark returned in the modern era, going on an aimless rampage. After the Giants of Darkness in the past used Yuzare to open the gate to the Eternity Core, Yuzare handed an Ancient Sparklence to Kengo, who used it to enter Trigger Dark's Inner Space to convince him some more, but instead found himself attacked by the Giant of Darkness. The Encounter of Light and Darkness Eventually, Kengo managed to reach Trigger's heart, and found out that he and Trigger are one and the same. They became one and Trigger Dark turned from the darkness, becoming Ultraman Trigger Multi Type.

Multi Type, Power Type and Sky Type, somehow split into three, fought against Carmeara, Darrgon and Hudram respectively. When Power Type and Sky Type were defeated, they converted into light that was absorbed by the nearby ruins. Yuzare sent the Eternity Core's power to Kengo at the cost of her own life. The light started to petrify Trigger and the Giants of Darkness until Trigger pushed his opponents into space while they turned into stone, with Trigger's own petrified remains landing on Mars and thus completing the time loop that started all these events. The ruins that absorbed Power and Sky Types were at some point used to construct the stone tablet recording these events and thus 30 million years later Akito was able to extract the Type Changes' light out of it to create Trigger's other Hyper Keys

Kengo is brought back to the present by another time vortex after hearing Akito and Yuna's voices calling for him. He transforms into Ultraman Trigger to fight against the Giants of Darkness including Trigger Dark, but is overwhelmed. Yuzare's spirit comes forth from the ring she left behind and through it, Yuna grants Trigger a fragment of the Eternity Core, allowing him to become Glitter Trigger Eternity. While his new power may be too much for him to handle, Trigger forced the three Giants of Darkness to retreat, and destroyed the rampaging Trigger Dark, reducing him into dark essence. The 30-Million-Year Miracle

Kengo Manaka converts the GUTS Sparklence into its Sparklence mode, loads it with the Trigger Multi Type or Glitter Trigger Eternity GUTS Hyper Key, and by pulling the trigger held skywards he transforms into Ultraman Trigger.[2][3]

"Build the future, the light of hope! Ultraman Trigger!"

Multi Type (マルチタイプ Maruchi Taipu) is Trigger's natural form that balances both speed and power. Whether on land, sea, or air, he can engage with a multitude of fighting styles.[2][3] It debuts in episode 1.

"Seize the victory, the light of strength! Ultraman Trigger!"

Power Type (パワータイプ Pawā Taipu) is Trigger's form that focuses on raw power. It works well in hand-to-hand combat against a heavyweight foe.[2][3] It debuts in episode 2.

"Dominate the sky, the light of speed! Ultraman Trigger!"

Sky Type (スカイタイプ Sukai Taipu) is Trigger's most agile form, he becomes able to utilize quick movements to attack. It is best used against monsters that can fly, battles in the air, or high-speed combat.[2][3] It debuts in episode 3. 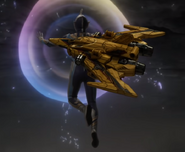 Trigger Dark (トリガーダーク Torigā Dāku) is Ultraman Trigger's original form as a member of the Giants of Darkness. Trigger had since lost access to this form after he defected to the side of light, but Carmeara's Curse of Darkness restores him after Kengo was removed from his empty husk.

Glitter Trigger Eternity (グリッタートリガーエタニティ Gurittā Torigā Etaniti) is Trigger's most powerful form. It combines the three strengths of Multi Type, Power Type and Sky Type, granted to him by a fragment of the Eternity Core.[7][8] The only downside is that this form uses a lot of energy and thus, Trigger can only fight for one minute. It debuts in episode 12.