Ultraman Tiga is the 12th entry in the Ultraman Series

Ultraman Tiga (ウルトラマンティガ Urutoraman Tiga) is the 12th entry in the Ultraman Series, airing from September 7, 1996 to August 30, 1997. It was the first Ultraman Series broadcast in Japan since 1980's Ultraman 80. The series is notable for revolutionizing and revitalizing the franchise, not to mention the great effect it had on the tokusatsu genre as a whole outside of Tsuburaya.

Set in a universe different from all previous series, Ultraman Tiga introduced new and radical updates to the Ultraman character for a new generation of audiences; most notably staring the first Ultraman with multiple combat modes and non-red colors (purple and gold). It is also considered one of the most popular entries in the franchise.

Ultraman Tiga was the giant of light that protected the ancient human civilization 30 million years ago. After the human civilization perished, Tiga become a stone statue. In the present times, Tiga was resurrected by merging with pilot Daigo from GUTS defense team, who also possess Ultra DNA in his body. At the same time, the 21st century Earth is facing threats of invaders from space and other dimensions.

Can Daigo and GUTS protect humankind from those invaders and saving Earth from destruction?

Ultraman Tiga was the fourth Ultraman Series to be adapted for a U.S. release, following Ultraman, Ultraseven, and Ultraman: Towards the Future. It was licensed by 4Kids Entertainment and aired on the Fox Broadcasting Company's FoxBox Saturday morning programming block. The first episode premiered on September 14, 2002.

Unlike the Super Sentai Series' adaptation into Power Rangers, which combined the original shows' tokusatsu sequences with an entirely new cast, Ultraman Tiga was simply dubbed into English. Nonetheless, 4Kids made a number of significant changes. There was an entirely new theme song and the original soundtrack for the series was replaced. Episode storylines was altered and simplified to comply with Fox's Standards and Practices division and accommodate the differences between Japanese and American commercial breaks and broadcasting scheduling. Each episode was typically one or two minutes shorter than its Japanese counterpart.

There was also a lot more blatant and crude humor. The Japanese Ultraman Tiga had a few moments of subtle humor and charming moments. The Americanized version came with dialogue that poked fun of the original material as well as the dubbing in general, which changed the personalities for some of the characters (Notable in this aspect was the transformation of Captain Iruma from a smart, level-headed individual into a complete airhead.) Additionally, Captain Iruma was referred to as a "sir" instead of a "ma'am", perhaps in an attempt at being politically correct. This caused some problems within the addressing of a commanding officer whether that person was male or a female.

The monsters were enhanced with new sound effects, and the transformation sequence was altered altogether, in a scene showcasing all of Tiga's forms and emphasizing the change from Daigo to Tiga. Additionally, Ultraman Tiga's "Multi, Power, and Sky Types" are changed into "Omni, Power, and Speed Modes," respectively. The Sparklence was renamed the "Torch of Tiga", although the Region 1 DVD Release refers to it as the "Spark Lance" for the first DVD (soon afterwards, the translation becomes "Spark Lens"). His light techniques were called "Luminizers", and Ultraman Tiga's Color Timer is referred to as his "Biotic Sensor." Probably the most infamous (and partially racial) of the Tiga incidents was in episode 14, where the Japanese dialogue was used in the Americanized version of the series as an "Extraterrestrial Language."

Ultraman Tiga was removed from the FoxBox lineup on March 15, 2003, due to low ratings, with only 25 episodes of the 52-episode series having aired. 4Kids initially planned to relaunch the show in September, but decided to release the Japanese episodes on DVD instead.[1] As a result, their dub is only viewable through recordings of the original broadcasts.

According to voice actress, Erica Schroeder (whom played the voice of Rena of GUTS,) she said that part of the reason for Ultraman Tiga's limited success in the U.S. was due to 4Kids was having issues deciding on whether to satirize the show or to make it serious, which explains the poorly handled humor and dubbing as seen throughout the dub.

Uchūsen (Spacecraft) Magazine began a serialization of an Ultraman Tiga manga in the Summer of 1997 written by Mamoru Uchiyama.

Dark Horse Comics published a manga-style series based on Ultraman Tiga in 2003–2004.

In 2014, the entire series has been remastered and released as part of the "Complete Blu-ray BOX". The Remastered episodes are actually done with upscaling and noise-reduction.

Mill Creek Entertainment is due to release the entire series, except for The Final Odyssey due to music rights issues, in October 2021 on DVD in North America. 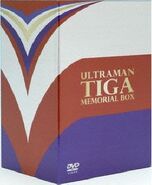 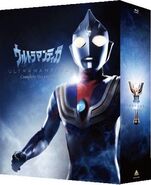