This may not be the article you are looking for. For other uses, see Tiga.

"It's no use. However hopeless it'll be, the light in people's hearts will never disappear!"

Hideyoshi Iwata
The Great Decisive Battle! The Super 8 Ultra Brothers version of Ultraman Tiga (ウルトラマンティガ Urutoraman Tiga) is an Ultra who was born from Daigo Madoka's will to save humanity.

After Daigo realized his dream to become an astronaut, a light grants him the Sparklence and becomes Ultraman Tiga. As the giant rises, the whole city begins to support him as he fights King Silvergon and King Goldras. Though Tiga gains the upper hand at first but only to be captured in Alien Super Hipporit's cylinder. Asuka and Gamu then also remember their own hopes and dreams with the help of Ryo and Atsuko which enable them to transform into Dyna and Gaia. The two giant later frees Tiga from Hipporit's prison and fights the two monsters. With both King Silvergon and King Goldras defeated, Alien Super Hipporit appears and attacks. The alien finally met his end when Tiga fires his Zeperion Beam.

However, the mysterious cloaked being and many other similar looking beings use their magic to revive the souls of the defeated monsters. The souls combine to form Giga Khimaira. The monster knocks down the three Ultras, however, their friends and the city continuously cheer them on and they rise up to right Giga Khimaira. Soon, Hayata, Dan, Go, and Seiji transform into the Ultra Brothers with the help of their wives. Together, they free Ultraman Mebius from his imprisonment. The five then join Tiga, Dyna, and Gaia help fight Giga Khimaira. After repelling several attacks from Giga Khimaira, it flees into space. The Super 8 Ultra Brothers follow it and finish it off. However after returning to Earth, the cloaked beings once again rise.

After the decisive battle, Daigo soon marries Rena. Together with the others, they travel to Nebula M78. However, it was unknown whether Daigo still has the Sparklence since the threat of Black Silhouette had ended.

Daigo raises the Sparklence to the sky and activates by shouting "Tiga!". The Sparklence' wing like "appendages" then opens and light shines from within transforming Daigo into Tiga.

Multi Type (マルチタイプ Maruchi Taipu) is Tiga's default form, which has equal parts of strength and mobility. Its main body colors are silver, red and purple. This form is assumed to have the same powers as the original Tiga's form of the same name. As he did not have much on-screen time, many of his abilities are still unknown.

Glitter Version (グリッターバージョン Gurittā Bājon) is Tiga's final form. Compared to the original's counterpart of said form, this form was born from mankind's hope to defeat the Giant Black Silhouette.

A translucent yellow-gold redeco of the Ultra Hero Series Ultraman Tiga Multi-Type figure released in 2000, his only paint operations are the eyes and color timer crystal, which is painted in gold.

Tiga is bundled with a similarly decoed Ultraman Mebius.

Both the Glitter Tiga and the Glitter Mebius figure from the 2-pack is also available as part of the 8-pack box set, bundled along with similarity decoed Ultraman, Ultraseven, Ultraman Jack, Ultraman Ace, Ultraman Dyna, and Ultraman Gaia. The only changes include is the cream color paint replacing the gold.

This box set is released as Ultra Brothers Club site exclusive item, sent out for participants who is an S member. 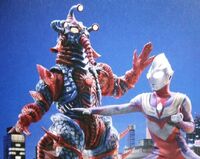 Tiga's first appearance in the movie

Tiga appears in the movie