This may not be the article you are looking for. For other uses, see Tiga.

Ultraman Tiga Manhua Chapter 1
Hong Kong manhua adaptation of Ultraman Tiga by Tony Wong and Khoo Fuk Lung in 1998. Later published in North America by Dark Horse. His story is very similar to his television counterpart but is still different in this interpretation. Unlike the television Tiga, there is no evidence to imply he was once evil, nor was he in love with Yuzare, also this story borrows heavily from the English dub. A prime example is calling the Color Timer a Biotic Sensor.

Thirty million years ago in the past Earth was home to two civilizations, the Kiliel and Humanity. Tiga was a mighty warrior of light and leader of a trio of Ultras that included himself. Arriving on ancient Earth after crossing the great expanse of space, Tiga came with his comrades and put a stop to their fighting forcing the two to live in peace. One of the Kiliel, Kyrieloid grew to respect the Ultras and fought with them against a great evil, however the humans proved treacherous and committed genocide on the Kiliel. Tiga was forced to face his old comrade and while it is unknown what happened in that battle Kyrieloid was forced to slumber for millions of years waiting for Tiga's return. It is unknown which battle occurred first, the battle with Kyrieloid or the assault on humanity by the monsters but it would seem both battles were closely connected and may have occurred one after the other.

Eventually a time came when the monster of Earth rose up to destroy mankind, it was unknown what force drove them but humanity had never seen the monsters attack in such number or coordination. Tiga and his two comrades raced to help humanity and fought their best to fight back the deluge of giant beasts. However, while they were not outclassed they were badly outnumbered. Faced with no other option the three huddled together, Tiga leaped into the air and the other two funneled their light energy into him. The nearby humans noted how dangerous that was and were worried Tiga may even explode. However Tiga unleashed a golden light, firing golden beams from his body that homed in on every monster, winning the battle but ultimately draining his and his comrades power.

Despite winning the battle the trio were utterly spent and their connection to the living world severely weakened. Either their bodies were turned to stone, or special replicas of stone were made, either way the three continued to exist in a dimension between life and death as the statue waited for countless eons in the pyramid of light. There they waited for one who would join with Tiga and serve as his connection to the living world again to fight for mankind's future.

Multi Type (マルチタイプ Maruchi Taipu) is Tiga's default form, which has equal parts of strength and mobility. Its body colors are red, purple, and silver. In the manhua, it is known as "Omni Mode" after the 4Kids dub.

In Power Type (パワータイプ Pawā Taipu), Tiga is at his physical strongest. This form is called upon when Tiga wishes to exert more physical power, but the cost is speed and agility. It is designed for high power and combat in high pressure environments. Its body colors are red and silver. In the manhua, it is known as "Power Mode" after the 4Kids dub. 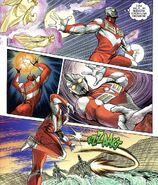 In Sky Type (スカイタイプ Sukai Taipu), Tiga trades much of his strength for great speed and agility making him much faster than any of his other Types. It is designed for high speed melee combat and aerial combat. Its body colors are purple and silver. In the manhua, it is known as "Speed Mode" after the 4Kids dub. 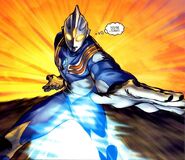 Powers and techniques Tiga can use in all of his forms.

Tiga and his comrades sending Daigo back to the real world

Tiga and his companions arrive on Earth