Ultraman Taro is the 6th entry in the Ultraman Series

Ultraman Taro (ウルトラマンタロウ Urutoraman Tarō) aired on Tokyo Broadcasting System from April 6, 1973 to April 5, 1974, as the sixth entry in the long-running Ultraman Series.

Kotaro Higashi trained to be a boxer, but after an incident with Astromons, he was killed. However, his body was brought to Nebula M78 where Mother of Ultra saved his life, by joining him with Ultraman Taro. Taro had spent many years training, honing his skills based on those of the other Ultra Brothers to become strong. The two returned to Earth, as a new Kaiju era was beginning.

Throughout the show, multiple cast changes were made. These were for several reasons.

A English subtitled DVD set was also released by the Malaysian company VGB Network. A few grammatical errors were made during the subtitling.

A Blu-ray remaster was released in 2017 through Amazon Prime. 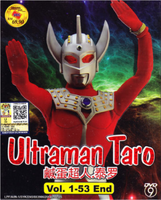 Retrieved from "https://ultra.fandom.com/wiki/Ultraman_Taro_(series)?oldid=532616"
Community content is available under CC-BY-SA unless otherwise noted.