Ultraman Wiki
Register
Don't have an account?
Sign In
Advertisement
in: Pages with reference errors, Items, Weapons,
and 6 more
English

Active
The Ultraman Suits (ウルトラマンスーツ Urutoraman Sūtsu) are suits of powered armor worn by certain people to become 'Ultramen' in the absence of the authentic Ultraman. Originally developed by Mitsuhiro Ide of the SSSP, more models have since come into existence through various means.

A creation of Ide, though some of their technology was provided by Yapool, the suit is a device made to be worn by a bearer of the Ultraman Factor, allowing them to use a greater potential of their Ultra DNA than before. It has two known wearers, Shin Hayata and his son Shinjiro. The two wore them to fulfill their roles as 'Ultraman' for the SSSP, helping to battle evil aliens and act as a deterrent for other aliens who may commit similar atrocities.

The Protosuit (プロトスーツ Purotosūtsu) was the first suit was worn by Shin Hayata, this black and grey armor is without a helmet or any extra features. It was used by Shin for some ten years, its first use being against the being calling itself Bemular.

It was later enhanced into the Convenience Prototype, featuring a facemask like the Ultraman Suit and a modernized power core. Worn by Shin to fight Ace Killer and his goons.

The newer Ultraman Suit (ウルトラマンスーツ Urutoraman Sūtsu) worn by Shinjiro, this suit more closely resembles Ultraman. It has all the same abilities as the first one but has a helmet and added armaments such as the Spacium Blades and the Spacium Beam. Its first use was also against Bemular in the same battle that saw the end of the prototype's use. The suit was described by Ide as a reinforced version of the prototype version, meaning greater protection and more features.

It is eventually upgraded into the B-Type suit, with more features added as well as more red coloring, and a reduction in weight. Ide upgraded the suit after noticing that the old suit could no longer keep up with Shinjiro's evolving fighting style. 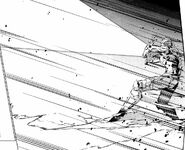 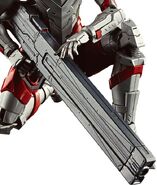 Ultraman Suit Ver. 7 (ウルトラマンスーツ Ver.7 Urutoraman Sūtsu Ver.7), also called the Seven Suit (セブンスーツ Sebun Sūtsu), is a newer model made to be worn by ordinary people, who do not have the Ultraman Factor, it is armed with a blade and other edge weapons to compensate for the wearer's lack of an Ultraman Factor/Superhuman Strength. Despite it being made to be worn by a normal human, it places a great deal of strain on the user, meaning not just anyone can wear it. As it is constantly being upgraded from combat data gain through use, it is commonly referred to as just Version 'Seven'.

His sword in action 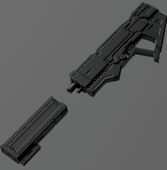 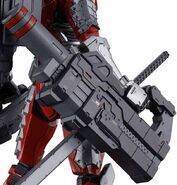 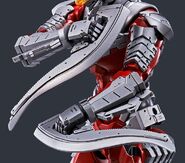 Ultraman Suit Ver. A was designed by Yapool to be worn by Seiji Hokuto. The 'A' in its name stands for 'Alien' due to its origins, but Seiji personally calls it the Ace Suit (エーススーツ Ēsu Sūtsu). It is similar in appearance to Ultraman Ace. 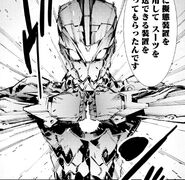 The Jack Suits (ジャックスーツ Jakku Sūtsu), also called the American Suits by some, were made directly by Yapool in America. The suits are larger and bulkier due to the lack of resources Yapool worked with and because he was asked to make them look more imposing. However their size is for more than show, as they house several pieces of technology. Among them is the suit which Jack wears, from whence the name comes, while the other two sport simplified heads and chests.

The Taro Suit (タロウスーツ Tarō Sūtsu) is a suit made by Yapool for Kotaro to replace his handmade suit, it resembles Ultraman Taro. It is based off the Seven suit, being an Ultraman Suit that does not have any combat functions and instead serves to protect the wearer, while acting as a power limiter to keep Kotaro's explosive power in check.

Suits that exist in materials outside the story's canon.

Ultraman Suit Tiga (Alternatively T.I.G.A. Suit (Tricolor Individual Guard Armor) or Three-Colored Ultraman (３色のULTRAMAN San-iro no Urutoraman)[6]) is an Ultraman Suit based on Ultraman Tiga. A powered suit that materialized by incorporating the concepts of the Ultraman Suits by using the Tiga Crystal as it's power source instead of a Spacium Core. Unlike the other suits, it was not created by the SSSP or their affiliated, and thus does not bear their marking and instead has the marking of GUTS (Group of Ultraman Tiga Suit) printed onto it.[7]

Through the power of Type Change, the Tiga suit has access to the followings forms.

The suit is featured in the story ULTRAMAN SUIT ANOTHER UNIVERSE, written by veteran tokusatsu writer Keiichi Hasegawa.[8] It was first revealed via Twitter that it would be made into a figure.[9]

Its wearer is Daigo (ダイゴ, Daigo), who is based on Daigo Madoka. 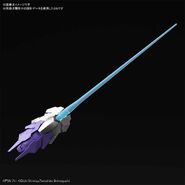 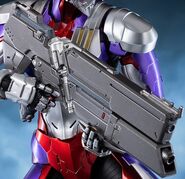 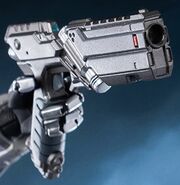 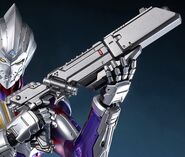 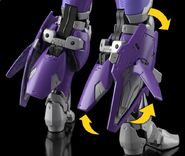 Ultraman Suit Evil Tiga is an Ultraman Suit based on Evil Tiga, featured in the story ULTRAMAN SUIT ANOTHER UNIVERSE, written by veteran tokusatsu writer Keiichi Hasegawa.[14] It was first revealed at an event showing the prototype Tiga Suit figure, as concept art.[15]

It used to be a jet-black suit dubbed as Black Ultraman (黒いULTRAMAN Kuroi Urutoraman), but changed into its current form when its Evil Crystal (イーヴィルクリスタル Īviru Kurisutaru) was embedded into the ruins of R'lyeh, changing it to its current appearance.[16]

Its wearer is currently unknown, but he is a person who views the Ultraman Suit as a necessity for mankind's evolution and created one for himself, similar in mannerism to Keigo Masaki.[16] Furthermore, the suit that he wears does not bear any designations and gained its name "Evil Tiga" by the SSSP. 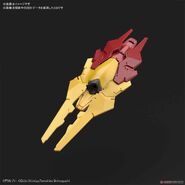 Ultraman Suit Zero, or Zero Suit, is an Ultraman Suit based on Ultraman Zero.[18] Like the Tiga Suit, it is featured in the story ULTRAMAN SUIT ANOTHER UNIVERSE.[19]

It was originally developed as Ultraman Suit Ver.0, an early prototype of Moroboshi's current suit, but was stored away in favor of simply building a new suit because it had too many functions and points to improve, and was then kept for research. However, the suit rebooted for reasons unknown.[20]

Due to currently unknown circumstances, the Zero Suit has three external forms: 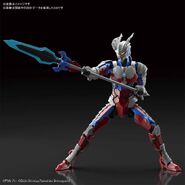 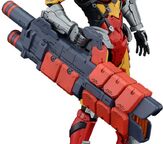 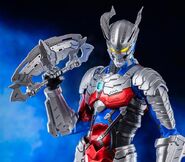 ZERO Twin-Hawk Defence Form
Ultraman Suit Darklops Zero is an Ultraman Suit based on Ultraman Zero. Like the Tiga Suit, it is featured in the story ULTRAMAN SUIT ANOTHER UNIVERSE.

The Zero suit wandered around the SSSP base on its own, found the transfer room, and transferred itself to Shanghai. However, the transfer device broke down and resulted in a charred Zero suit without a power system (Loss Of Power System) to remain in the base's transfer room. This later became known as the DARK LOPS suit.

Just like the character he is based on, the wearer of the Darklops Zero suit sees himself as a rival to Zero Suit's wearer.[27] 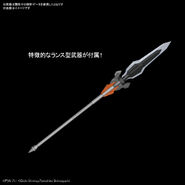 Lance-Type Weapon
A Jugglus Juggler themed suit was shown for an Ultraman Suit modeling contest exhibit.[29] This model was created by modeler Kei Tadano by painting the entire figure of Shinjiro's Type A suit while adding Ver.7's Spacium Sword.[30]

These are Ultraman Suits that appear only in the mobile game ULTRAMAN: BE ULTRA. 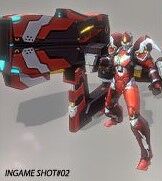 Unnamed Blaster
Ultraman Suit Gaia is an Ultraman Suit based on Ultraman Gaia Supreme Version[37] to make it more identifiable on a mobile device.[19] 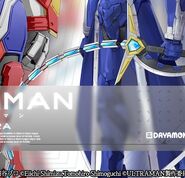 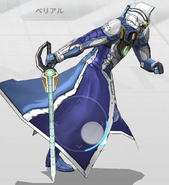 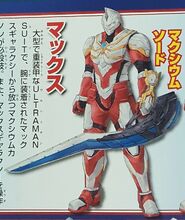 Knight Brace
The Belial Suit is an Ultraman Suit based on Ultraman Belial.[44]

The newer model used by Shinjiro

Ultraman Suit Ver. 7.3 with all its weapons

Close up of Moroboshi's Helmet 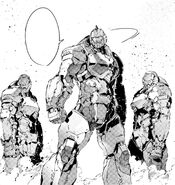 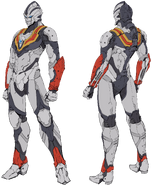 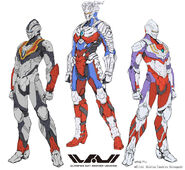 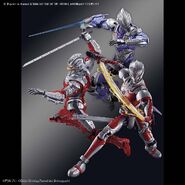