The manga was originally supposed to serve as a prequel to the Showa era of the Ultraman Series, showing the lives of the Ultra Brothers before the Ultras came to Earth, before it was retconned. There are a total of 93 chapters, collected into 16 tankobon volumes.

The story begins with the people of the Land of Light creating an artifical sun called the Plasma Sun to replace their dead one. However the device is interfered with by Aliens before its activation, aliens who intend to use it to transform themselves into stronger lifeforms. As a result the human like natives are transformed into Ultras but many of the Flora and Fauna are also transformed, into monsters. Knowing that the light spread across the universe the Ultras spread across the stars to combat this threat.

The manga bares a few differences from the TV World of the Land of Light. 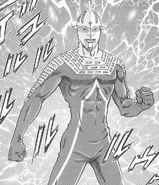