One day, a brother and sister pair came to visit an observatory. The brother, Shota Tsukishima was a 20-year-old without a job and was there in order to be interviewed for a position as temporary worker. Hikari Tsukishima, his sister came along for the interview with her brother and also for a tour of the observatory.

While leaving the building was attacked by an invading monster from outer space. At that time, Shota was wrapped in pink light. From the light Shota heared a girl's voice saying "Please lend me your body" but the being of light noticed that Shota was a man, and it instead merged with his sister to defeat the monster. 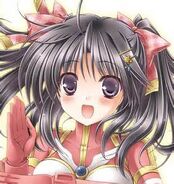