Debuting at the All-Star Wrestling, he was a cowardly heel who often cheated. With the help of a real Ultraman, he became a babyface and has been ever since. He often fought 'monsters' of wrestling, and was told to change his heel gimmick by Tsuburaya Productions themself. 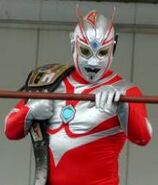