"In the name of the Galaxy Rescue Force... I, Ultraman Ribut, have arrived!"

Jun Takeuchi[1]
Ultraman Ribut (ウルトラマンリブット Urutoraman Ributto) is an Ultra Warrior from the Land of Light. He was created by the joint collaboration between Les' Copaque Productions, the creators of Upin and Ipin, and Tsuburaya Productions. Ribut first appeared in episodes 25 to 27 in the 8th season and episodes 28 to 30 in the 9th season of Upin and Ipin and made his first canon on-screen appearance in Ultra Galaxy Fight: New Generation Heroes. Since then, he reappeared in the followup to New Generation Heroes, Ultra Galaxy Fight: The Absolute Conspiracy where he plays a prominent role in the first and third parts of the miniseries.

Ultraman Ribut shares his design with many other previous Ultras, but is mostly reminiscent of the Showa-era Ultras. In his animated appearances, his design has a somewhat cybernetic feel and has some gear mesh design. He is also the first known Ultra who possesses cross hatch patterns on some of his red parts. However, these minor details are absent from his live-action suit(s). Though Ribut is primarily based on the Showa Ultras in design, he features pale blue crystals on his forearms and shins, reminiscent of the recently-starring Ultraman at the time in Japan, Ultraman Ginga.

In the past, Ribut worked with Ultraman Max as a Civilization Observer. They went to Planet Mikarito to investigate the planet's abnormal aging. While exploring the planet's caverns, the two Ultras discovered a Maga-Soul, the egg of a Maga-Orochi, a monster from the Monster Galaxy which was the source of Mikarito's ailing health. To make matters worse, a Hellberus emerged, and began attacking Max and Ribut, forcing the two Ultras into a battle, though the duo had the upper hand. Ribut was able to restrain Hellberus with his Strong Net, when Alien Sran suddenly appeared and attacked, easily having the advantage in speed and overpowering Ribut, then Max, infecting him with Gudis Cells. With Max weakened, the Maga-Orochi egg's tendrils grabbed hold of him. In his last words before passing out, Max urged Ribut to flee, and he did, arriving back at the Land of Light to report to Zoffy, Ultraman Taro and Ultraman Hikari on what he had witnessed. There, he met his childhood friend, Sora, who had coincidentally returned to the Land of Light at the exact same time with 80 and Yullian after 80 managed to briefly force Leugocyte into hiding. After informing the Ultras of Max's grave condition, Ribut was instructed by Ultraman Taro to head to Planet K76, a planet used as a training ground. When he arrived, he found that Ultraman Great and Ultraman Powered were there, ready to help train Ribut, so that in three days an expedition to Mikarito to rescue Max could begin.

Ribut's training session with Great and Powered immediately began, with the two not holding back against him. They advised him to look into himself and unleash his latent power, which Ribut managed to do, and catch the both of them by surprise. Seeing his training completed, Great and Powered granted Ribut the Ribut Blocker and Spreader Rod respectively, saying that he should be able to use them effectively now. With that, Ribut returned to the Land of Light to receive the Gudis antidote from Sora, traveling back to Planet Mikarito to rescue Max, who had already been partially mutated and seemingly brainwashed by his infection, rendering the Ultra berserk. Running straight for Max, Ribut managed to hold him back so he could inject the antidote, returning Max to normal but in a weakened state. Despite curing him, the Maga-Soul still hatched, now empowered by the Gudis cells in the area, though the progression of its accelerated growth had only gone so far as its base form. Max soon had his energy restored via the Max Galaxy, so together with him and the recently arrived Xenon, Ribut fought against the Lord Monster, eventually managing to defeat the beast.

Ribut returned to the Land of Light, reuniting with and thanking Sora for her efforts in creating the antidote. Taro approached him, congratulated his efforts, and instructed him to travel to the Galaxy Rescue Force's HQ, with Sora joining him. Together they gladly accepted the offer and journeyed to the headquarters, where they were welcomed by current members Queen Izana, Andro Melos and Gukulushisa. The Beginning

Ribut arrives on Planet Liquitor, rescuing a lone Ragon who was threatened by Peguila and fights against the monster before he proceeds to kill with Galaxium Blaster. After having a chat with the grateful Ragon, he received an Ultra Sign from Taro telling Ribut to help Rosso and Blu, who were being attacked by Etelgar and fell down to Planet Penol, Ribut appears and defends them with his Blocker Effect just before the brothers are hit by an energy ball. Ribut puts Etelgar in his Strong Net so that the three of them can escape. They go back to the land of light, and Taro gives him another mission - to find "someone". Thanks to intel from the Galaxy Rescue Force, Ribut invaded the magical space. Ribut approaches the "blue giant" and reveals he the knows his identity - Ultraman Tregear. Ribut attempts to apprehend him, but Tregear simply toys with his opponent.

After a fight, Tregear revives the fallen Ultra Dark-Killer and Ultraman Zero Darkness, the former growing to gigantic size and going berserk due to his overflowing power. Tregear leaves Ribut to fight two Red Kings, saying that he will at least do him the favor of remembering his name. Ribut engages in the fight against both Red Kings and kills them using the Remote Cutter. As the Red Kings explode behind him, he leaves the rest to the New Generation Heroes. Ultra Galaxy Fight: New Generation Heroes

Ultrmaan Ribut and Andro Melos arrive on Planet Maijii to help the Tri-Squad fight against Zett and his army of Zettons. Together, they managed to defeat the Zetton Army while Taiga went to face Zett, forcing him to retreat after firing the Aurum Strium at him. Receiving a message from Taro, they all went to the Land of Light to regroup, where Ribut briefed the three of them on the situation with Absolute Tartarus.

Soon after defeating Ultimate Shining Zero in Narak, Absolute Tartarus appeared, taking Yullian hostage and informing the heroes of his true motives before getting Belial and Tregear to fire their beams at them all. The group also received word from Ultraman Hikari that Genegarg had stolen a Z Riser and Ultra Medals from the Land of Light, causing Z to fly off in a hurry while Zero followed him. The Ultra League and the Tri-Squad prepare to recruit more heroes for the upcoming fight against The Kingdom. The Appearance

G Flash (Gフラッシュ G Furasshu): Twin bracelets used by Terasawa. In order to transform, Terasawa would need to put both of the bracelets together. 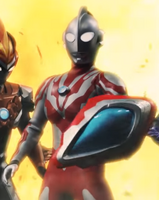 The Defense Rescue Force were investigating a ball of fire that fell onto the Earth, causing a mysterious haze to develop. After complaining about illegal logging and river pollution, they found that the cause was Alien Kilat, who then attacked them in their aircrafts. Fortunately, Terasawa of DRF turned into Ultraman Ribut and saved the Aman 1 plane from crashing. Alien Kilat decided to take Aman 2 as a hostage and blasted at Ribut, though he simply dodged the attacks and ran towards the alien, who had thrown the plane towards a highway. Acting quickly, Ribut flew towards it and grabbed it out of the air.

Upin and Ipin shoot at the alien, which did little more than grab its attention. Luckily, Ribut stops its attack and takes the fight elsewhere. Seeing an opportunity, Kilat burned the area and inhaled the smoke, increasing its strength. However, the DRF realized this and deploys air filters to filter out the smoke. The angered alien then shot at Ribut, who dodged the attack. However, the misfired beams hit a power station and awakened Raksasa Halilintar, who fed on the leaking electricity and grew larger than Ribut himself before heading towards the city of Kuala Lumpur.

Ribut quickly finishes off Alien Kilat with his Galaxium Blaster before heading to the city to stop Halilintar, arriving just in time to defend some of the kids from Halilintar's attack, though he loses his Ribut Blocker in the process. Ribut's Signal Timer starts to flash soon after and he begins to lose consciousness, but he gets up again after hearing Upin and Ipin cheer for him. Attacking Halilintar once more, he slices off its horns using his Remote Cutter before placing it in his Strong Net, using it to fling Halilintar into space. Thanking Upin and Ipin for their bravery, Ribut grants them a parting gift, which turn out to be the G Flash placed on their wrists when they wake up in the real world.

The shadows of people in Kampung Durian Runtuh were disappearing, making the people become lifeless husks. This is the doing of Raksasa Bayang, who fed on the shadows of humans. When it targeted Upin and Ipin, Ultraman Ribut had to rescue them, though the monster proved to be a formidable foe. It almost devoured Ribut's shadow, but he saved himself by unleashing light from his crystals, repelling the beast.

Bayang continued to eat the shadows of others, and had increased to double its size since it last fought Ribut. The monster resurfaced near the DRF base, and they have no choice but to deploy Upin and Ipin to free the shadows trapped inside it. After managing to do so, Bayang shrank back to its regular size. As the brothers' G Flash shined, Ultraman Ribut reappeared to battle the monster, though he was at a disadvantage because Upin and Ipin were still within it. After managing to extract them, Ribut engaged the monster in a proper battle, though he had to end the fight quickly as his Signal Timer had started flashing. Knocking Bayang into the sky, Ribut finishes off the monster using his Galaxium Blaster.

With the battle over, Ribut brings the brothers into his Inner Space to grant them another gift; more of his light was donated to their G Flash. The brothers are transported back to their home, and an image of Ribut appears in the clouds, bidding them farewell.

Ultraman Ribut made his debut as an Ultra Hero Series figure for the very first time. Molded in red soft vinyl plastic, Ribut features primarily silver, some blue (color timer and the Ribut Blocker crystal) and cream (eyes) paint operations. The figure is based on his live-action suit rather than his CGI iteration of the character seen in Upin & Ipin.

This figure was initially released as an exclusive for the Ultra Heroes EXPO THE LIVE event held in November 2019 before it became a standard retail figure in February 2020. The retail release labels its ID number as EX.

Ribut and Zero fighting the monster 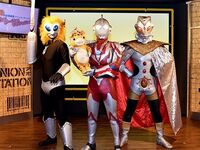 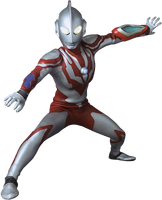