Reiga's base design was modified from a scrapped design for Taiga. His horns were then changed and lengthened and the Taiga Spark, which he initially did not have, was put on his arm. The red and blue parts on his face are derived from the New Generation Eye, and a rivet-like design was added to his gloves and boots.[4]

The might of Grimdo after devouring Tregear proved to be too much to handle, even for the combined powers of the New Generation Heroes in their final forms. As Taro shields the group from one of its attacks, he orders them to concentrate their energy on Taiga's Ultra Horns. Doing so grants Hiroyuki use of the New Generation Eye, which he uses to transform into Ultraman Reiga. Reiga withstands all of Grimdo's assaults with ease and defeats it with the Reiga Ultimate Blaster, destroying Grimdo and Tregear in the process. The New Generation Heroes then separate and bid farewell before they depart from Hiroyuki's Earth. Ultraman Taiga The Movie: New Generation Climax

The New Generation Heroes were once again on the ropes, this time by the hands of Gua Spectre, who, like Grimdo before, overpowered each of their individual final forms. As a way to turn the tables, the squad transferred their powers to Taiga to yet again become Reiga. Whilst Ultraman Z was busy with Gua's minions, Reiga took on Gua itself. After a brief battle, the power of Reiga proved too much for the undead emperor, being finished off with the Reiga Ultimate Blaster. Following the victory, the Super Ultra defused back into his component parts.

Hiroyuki Kudo uses the newly formed New Generation Eye to transform into Ultraman Reiga by putting the item front of his face and pressing the button on the side.[3] 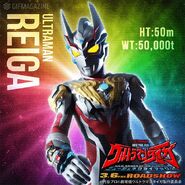