Regulos' name came from Regulus, the brightest star in the Leo constellation, whose name in turn is derived from the Latin word Rēgulus, meaning 'Prince' or 'Little King'.

Regulos first appeared during Yullian's imprisonment in Narak after The Kingdom successfully captured her as part of their plan to take over the Land of Light, having been contained within the dimension for an unknown amount of time. After Absolute Tartarus left Narak through a portal, Yullian briefly attempted to follow him, before turning to find Regulos, who was restrained with several energy shackles to keep him in place. Though Regulos was obscured by shadows, Yullian recognised him. The Appearance 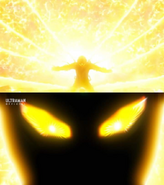 Regulos (silhouetted) as a prisoner in Narak.