"This is the story of us brothers. The starting of Ultraman."

Ultraman R/B is the 30th entry in the Ultraman Series

Ultraman (ウルトラマン Urutoraman Rūbu)[1] is the 30th entry of the Ultraman Series, created by Tsuburaya Productions.

The two main characters, Katsumi and Isami Minato, are brothers who live with their younger sister and father who run a specialty store. Until then, they suddenly encountered an unknown gigantic organism; a monster had appeared on the street.

Using the R/B Gyro, along with the power of the R/B Crystals, they transform themselves into Ultramen!

The battle of Ultraman Rosso and Ultraman Blu starts here! 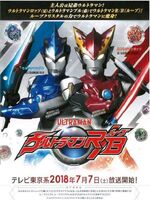 An unusual case considering previous years, Tsuburaya Productions blocks most countries outside Asia from viewing the series via their official YouTube channel, and the series is not simulcasted on Crunchyroll either. However, the series is simulcasted in China. On various social media platforms and their own website, Tsuburaya Productions has stated that there will soon be new information regarding the viewing of Ultraman R/B for countries outside Asia.[2].

Retrieved from "https://ultra.fandom.com/wiki/Ultraman_R/B?oldid=514380"
Community content is available under CC-BY-SA unless otherwise noted.