"Kai, I am the light; I will never truly leave you. Light shines everywhere, and in everyone. If you open your eyes and look around, you will find my light. Farewell...."

Residents of the Land of Light
Inter Galactic Defense Force

Ultraman: The Ultimate Hero episode 1 "On a Mission from M78"

Masahiro Maeda
Katsushi Murakami
Ultraman Powered (ウルトラマンパワード Urutoraman Pawādo) is the featured Ultra Hero of Ultraman: The Ultimate Hero, the first Ultraman Series tokusatsu entry to be produced in the United States. Powered bonded with Kenichi Kai of WINR to defend the Earth against the Baltans as well as other monsters and aliens that threaten humanity.

Powered's coloring is based on the original Ultraman and details are added to the details. In order to express unevenness of a delicate line, the suit was made entirely with clay prototype and molded by die-cutting of the foam rubber. While it can create a realistic texture as a living thing, it is damaged by actions intensely, and a new suit is prepared for each shot. Also in the Ultra series most of the mask and body suit are integrated, but Powered was able to attach and detach only the mask. Japanese magazine media and attraction shows, and subsequent theatrical versions, costumes using wet suits made by Rice Production are used, and undulations of the chest and shoulder lines, knee parts are represented by stacking of fabrics.

Until just before crank in the eye color was the same white light as the traditional Ultraman, but it was changed to blue due to being overseas.

Ultraman Powered was on a mission to bring down the Baltans, an empire that brought death and destruction to countless worlds. Soon his hunt came to Earth, where he proved to be unable to survive without a human host. Choosing a suitable host, the young member of WINR, Kenichi Kai, Ultraman Powered brought the fight to the giant Baltan rampaging through the city.

The fight was fast and brief, but brutal, as the two knocked one another across the streets and into the buildings around them. As the other members of WINR watched on, the fight took to the sky and then back to the streets, where Baltan tried its best to bring down Powered. But the hero would not fail and launched the Mega Spacium Beam, a weapon so powerful it completely vaporized the Baltan.

While this threat was over, the mission of protecting Earth had just begun. While the Baltans retreated and re-planned, more monsters, some native and others alien to the Earth, began to rise. With the help of WINR, Ultraman Powered would put an end to the reign of several giant monsters and got in the middle of many battles between creatures such as Aboras and Banila. But as his adventures continued on, the Baltans soon returned. Watching over every battle with cruel eyes, they created a monster, Dorako, designed to dissect Powered. The monster not only handed Ultraman his first defeat, but threatened millions of lives. As the winged creature rampaged, Kai again summoned Powered, but ultimately, it was a battle that would permanently end their bond.

Dorako’s sharp blade cut through Powered's chest, and while ultimately the hero managed to kill the fiend, something unexpected had happened: Kai also felt the wound and pain! Hospitalized, Kai's wounds healed quickly, but the hero refused to put his host in any such danger again. He parted with Kai and headed directly for the WINR base to confront the final monster: Zetton.

With the base in ruins, Powered tried his best to vanquish it before his energy ran out, but it was futile. After his normal attacks failed, he quickly fired away his Mega Spacium Beam, but Zetton either reflected or shrugged off each blast. As the final seconds ticked, Powered fired one last time at Zetton's weakened body, and it finally gave out. The alien menace was destroyed, but with his power depleted, Powered was doomed.

He fell unconscious, his body lying helpless as WINR confronted the Baltan ship head-on. However, descending from the sky, two orbs came and rescued the crew and destroyed the invasion force before gathering up Powered's body. Now three orbs flew back into space, possibly to return in the future.

After Ultraman Belial was freed from his prison, he went to the Land of Light with a weak Ultraman Taro. All the Ultras were already waiting for Belial to arrive, after Belial showed the Ultras that he defeated Taro, Ultraman Powered immediately along many Ultra Warriors charged against Belial to fight him. At a certain point during the fight, Powered uses his Mega Spacium Beam against Belial, but he blocked it by using Ultrawoman Beth as a shield, and then Belial fired a blast of energy from the Giga Battle Nizer against Powered, hurting him and defeating him. After defeat almost Ultramen in the Land of Light, Belial stolen the Plasma Spark, which make the Land of Light quickly freezes over, as well as all of its denizens, including Powered as well (except Ultraman and Ultraseven survive by defending themselves at the last moment). In the ending, after the Plasma Spark was recovered, every Ultra, including Powered, was seen listening to Ultraman King's speech. Powered was seen alongside the Ultra Force, Ultraman Great, and Ultraman Max.

Ultraman Ribut was instructed by Ultraman Taro to head to Planet K76, a planet used as a training ground. When he arrived, he found that Ultraman Great and Ultraman Powered were there, ready to help train Ribut, so that in three days an expedition to Mikarito to rescue Ultraman Max could begin.

Ribut's training session with Great and Powered immediately began, with the two not holding back against him. They advised him to look into himself and unleash his latent power, which Ribut managed to do, and catch the both of them by surprise. Seeing his training completed, Great and Powered granted Ribut the Ribut Blocker and Spreader Rod respectively, saying that he should be able to use them effectively now. With that, Ribut returned to the Land of Light to receive the Gudis antidote from Sora, traveling back to Planet Mikarito to rescue Max, who had already been partially turned. As Ribut rushed in to cure Max, Powered handled Hellberus and finished it off. After the battle was over, Powered and the others return to the Inter Galactic Defense Force Headquarters to report the situation to Zoffy Ultra Galaxy Fight: The Absolute Conspiracy

Kenichi Kai transforms into Powered by using an item known as the Flash Prism, or a second Beta Capsule in the English version. Much like how Shin Hayata transformed into the original Ultraman, but unlike Hayata, Kai clenches his "Beta Capsule" in his fist before transforming into Powered. After Powered separated from Kai for the final battle with Zetton, WINR used the abandoned device to attack the Alien Baltan ship. 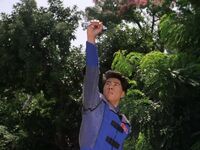 Ultraman Powered reappeared in the puzzle role-playing game for mobile devices, Ultraman Galaxy as a UC (Uncommon) card that you can unlock him in one of the levels in the game with a rare chance of getting Powered.