This may not be the article you are looking for. For the Dark Ultra with a similar name from Ultraman R/B, see Ultraman Orb Dark.

"So, you know all my moves? Alright then!"

―Ultraman Orb making a remark to his dark copy

Hideo Ishiguro (Stock grunts)
Ultraman Orb Darkness (ウルトラマンオーブダークネス Urutoraman Ōbu Dākunesu) is a dark clone of Ultraman Orb that first appears in Ultra Galaxy Fight: New Generation Heroes. He is presented as a member of the League of Darkness.[1][2][3] 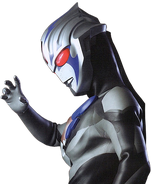