Hiroshi Maruyama
Ultraman Noa (ウルトラマンノア Urutoraman Noa) is an Ultraman from the World of N who pursued his evil counterpart, Dark Zagi, throughout various universes and countless alien worlds, including those of the World of the Land of Light. Noa is the true form of Ultraman the Next/Ultraman Nexus.

Ultraman Noa was part of the Ultra N Project, which was meant to reboot the Ultraman Series. He is supposed to represent the concept of "Nostalgia", in that he is the fully evolved "adult" form of Ultraman the Next/Ultraman Nexus, which were represented as "child" or "adolescent" forms respectively.

Ultraman Noa is possibly named after the biblical figure, Noah, that made the Ark. Noa's name can also be seen as a shortening of the word Nostalgia continuing the themes of the names of Ultraman Nexus' forms.

Ultraman Noa was designed as a redesign of the original Ultraman. As with the first and second phases of Heisei Ultras, Ultraman Noa is designed by Hiroshi Maruyama. He is proposed as a break from the conventional design of Ultras, as his Ultra Armor is entirely silver and his Energy Core's purpose is being his equivalent to a Color Timer. The Noa Aegis never appeared on his original design, hence its real-life gimmick of being removable for stage-shows. The suit also has silver plating in addition to the color paint, but because the paint took time to dry, Noa's first photo session had his suit with visible fingerprints and scratches.

The Ultraman Noa suit was made to be flexible for live shows, however, it was only used in the final episode of Ultraman Nexus, and for a very short period of time, as the show was cut from 50 episodes to 37 due to poor ratings. The suit's coloration is silver, however, as seen in the image on the left, in person and images of stage shows, it appears grayish. It could be because:

Ultraman Noa was a being of light who came from a distant galaxy. 20,000 years before Ultraman Nexus, he arrived on M80 of Messier 4 to fight against the Space Beasts that threatened the nebula's inhabitants. He was depicted to have bonded with various Dunamists as their will gave the silver giant the strength to fight. With Noa sending itself to a deep slumber, a race of aliens duplicated the silver giant into their own protector Zagi but their efforts backfired when it went rogue. The alien race detonated their sun in hopes of removing the mistake but this created a dimensional rift to Nebula M78 which Zagi proceeded to go to as Noa followed in pursuit. Ultraman Noa joined forces with the Inter Galactic Defense Force and managed to expel Zagi from the universe. While Zagi lost his body, Noa's power was reduced from the effects of using Noa The Final and devolved into Ultraman the Next.

Noa's pursuit against the Space Beast Beast the One led to his arrival on Earth in year 2004, merging with the pilot Shunichi Maki to continue his fight as The Next. Noa would later separate himself from Maki before he went to a slumber. Four years later, he evolved into Ultraman Nexus and resumes his mission to fight against Space Beasts. He bonded with various Dunamists, including former cameraman Jun Himeya, Promethean Child Ren Senjyu and finally TLT sub-captain Nagi Saijyo. By the time Nexus was captured as part of Zagi's plan to retain his full strength, he bonded with Kazuki Komon, who proceed to access all available forms of Nexus before he finally regain his true form as Noa to turn the tables and finishing off his twisted doppelganger once and for all. Though Space Beasts continued to appear, the Night Raiders were still there to face the threat with Noa and Komon. Bond - Nexus -

Three years after Dark Zagi's destruction (2012), Noa having already left Komon with the Space Beast threats are now under the management of the Night Raiders. However, when an unknown man revealed himself to be Dark Lucifer, both Komon and Nagi bonded with Ultraman Noa once more to counter this threat.

Noa appears as a statue on the Planet of Mirrors with the Shield of Baradhi, however, when Ultraman Belial attacked the Planet of Mirrors, the statue was destroyed. After Ultraman Zero's energy was depleted, Nao revealed that the Shield of Baradhi is in everyone, after which all the light energy (the Shield) from everyone at the battlefield against Belial's Army, and from the Planet Esmeralda, created a strong light. In a dream-like state, Zero was suddenly revived by the light and was given the Ultimate Aegis by Noa, which he used to defeat Arch Belial. This is the first and only confirmed time where Noa was intricately connected to an artifact of Baradhi. Ultraman Zero The Movie: Super Deciding Fight! The Belial Galactic Empire

Ultraman Noa was part of the multiversal conflict known as the Dark Spark War. For unknown reasons, Noa was weakened and was fighting in his Next form. However, the war was interrupted when Dark Lugiel used the Dark Spark to transform all Ultras, Aliens, and Kaiju into Spark Dolls. The location of Noa's Spark Doll is a mystery, even though it is possible Noa was later restored to his original form when Ginga finished off the mastermind himself.

Noa had fought against Etelgar prior to the movie, but the exhaustion from their battle forced him to devolve into Nexus.[1] This led to his imprisonment in Etelgar's castle ship before finally escaping with the help of UPG. Ultraman Ginga S The Movie: Showdown! The 10 Ultra Warriors!

The Dunamists ( Dyunamisuto lit. chosen people) are beings who can bond with the light to become Ultraman Noa or any of his lesser forms. The source of this ability is never truly explained, but it implied to have to do with their mindset. As those chosen are often those with a desire to protect or fight Space Beasts no matter the cost to themselves. This bonding provided the giant additional strength, evidenced by his constant evolutions in the series. As mentioned by Sera, there were multiple Dunamists in the past during Noa's time in M80 (Visitor's home galaxy) while ancient drawings suggested that he had been fighting as Nexus. 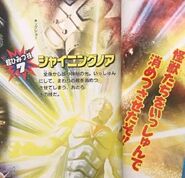 Ultraman Noa is a playable character in Ultraman Nexus for the PlayStation 2. He is unlocked if the player finishes Battle mode with 5 different characters. 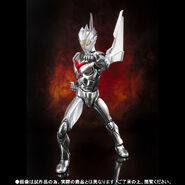 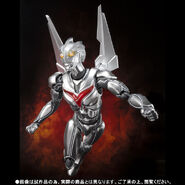