Ultraman Nice episode 1 "You're Not Calling!"

Hiroshi Maruyama
Ultraman Nice (ウルトラマンナイス Urutoraman Naisu) is an Ultra who came from Planet TOY-1 (トーイ一番星 Tōi Ichiban-sei) in a series of "infomercials" (1 minute toy commercials) presented during the 1999 Japan reruns of Ultraman Tiga. The 1 minute spots, advertising the wide variety of Bandai Ultraman toys, actually do have a storyline, along with some "surprise guests." He also has an alter ego: Dr. E.G. (エッグ Dokutā Eggu), a demonstrator of the toyline Ultra-E.G..

In a world where Ultraman is nothing more than a television series, a hero by the name of Ultraman Nice was active. Much like the characters in the shows, Nice defended humans from Alien Zagon and his trio of monsters. Taking on the host of Ginga Yumeboshi, the vice-captain of GOKAZOKU, he was called into action when Ginga eats a piece of chocolate from his Nice Dreamer wrist band. While pysically weaker then his peers, he often is able to defeat his enemies in a pinch.

With the looming threat of The Kingdom becoming larger, Nice, alongside Ultraman Zearth and Ultraman Boy, trained at the Ultra Colosseum together. Nice and Zearth practiced fighting together, but Nice became annoyed after Zearth messed up their routine. The two began squabbling, which escalted to the point where the two simultaneously punched each other in the face. Ultrawoman Grigio broke up the argument and came to heal them, before the three introduced themselves to Grigio.

In the future, humans had began to gain control of Ultra-E.G. monsters that originally Ultra Kaijus that trapped into egg-like toys by an unknown force. In response to this Dr. E.G., the head of Ultra-E.G. researchers appeared and planned to conduct further studies on these Ultra-E.G.s. He stubbornly denied his true identity as Nice, though in Tsuburaya All Monster Photobook does confirm his identity.

Ultra Hero Series Ultraman Nice is 16.5cm soft vinyl figure based on the titular character, and he features 3 points of articulation on the arms and waist. Molded in red ATBC-PVC soft vinyl, Nice features silver, and some white (eyes), gold (color timer), and metallic blue (head and timer crystal)

The photo on the rear packaging depicts him fighting against Momo Zagon.

In 2000, the 1998 UHS Ultraman Nice mold is re-released for this lineup, featuring a minor change on the eyes, which is now painted in yellow-and-white gradient to evoke his light-up eyes.

The photo on the rear packaging and the data card now depicts the Ultra fighting against Alien Zagon.

A Clear Red glitter redeco of the UHS Nice figure, the toy was made as an M-78 Event exclusive and as one of the items for Tsuburaya's flagship stores in Japan.

The notable differences of the figure is the eye is painted in light cream color (similar to the 2009 Ultra Hero Series toys).

A 14 cm not-for-sale Bandai soft vinyl figure, which was based on Ultraman Nice's alter ego: Dr. E.G. Similar to the Ultra Hero 500 figures, the left side of the foot contains a scanning sticker for the Egg Scanner to scan (sold separately, of course.). Due to the toy's interactivity, it can be used with the Ginga Spark.

Released as part of the one-shot "Ultraman Heroes" line, Ultraman Nice is released as an 8cm soft vinyl figure.

Boxes that comes with the character includes the toy.

A smaller figure version of the Ultra, Ultra Hero 500 Ultraman Nice and he also features Live Sign stamp under his left foot, which can be scanned with the Ginga Spark, and it unlocks one of the spark's sound effects: "Ultlive! Ultraman Nice! (Nice! x3)". If the trigger is pulled to reveal Ginga's face, Ultraman's Transformation sound effect is played. If scanned with the DX Dark Spark, it does not open the Device's face hatch.

Like most of the figures in this line, Several of Nice's details are omitted, mainly on the back section.

In 2016, Ultraman Nice is re-released under the "Ultra Hero Series" re-branding, lacking the live sign.

The Ultra Hero 500/Series (2016) Ultraman Nice was released by Bandai China with the and Ultra Monster Series Booska. 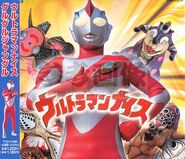