A warrior from the stars, Millennium awakens from dormancy to fight the alien monsters that threaten peace on Earth, while facing his nemesis Dark Ultraman and unraveling the secrets behind S, the leaders of the newly-established world government.

In Ultraman Millennium Live Show in Bangkok, Millennium is a nickname given to him by the human populace, and his real name is actually Ultraman Shu (อุลตร้าแมนชู Xultr̂āmæn chū).[1] However, it seems that this setting is only exclusive to the live shows.

The name "Millennium" is a term signifying a period of a thousand years. Sompote Saengduenchai conceived the character at the start of the new millennium (year 2000), hence the name.

His real name, Shu, is derived from the Egyptian god of the same name, the embodiment of light and wind.

Millennium is an empathetic, peace-loving individual who holds a strong resentment towards evildoers, as he believes that any conflict can be resolved without death or destruction, even if it means sacrificing himself for the greater good.[2]

Take note that Project Ultraman and the live shows follow different storylines and are separate continuities.

Due to the scarcity of resources available, inferences will be made from various sources to construct this section.

In the near future, the colossal alien organism Maryway is headed towards the Earth. Millennium, a young officer from the Inter Galactic Defense Force, attempts to tackle the monster off its course, but both beings crash land into Japanese seas, and a huge tsunami triggered by the impact floods the islands of Japan and some cities off coastal China. However, that is the least of the Earth's concerns, as the collision results in a major shift in her axes that leads to extreme climate change, turning one-third of the surface into barren wasteland and pushing humanity to the brink of extinction.

Some time after, a man named Neil finds himself in the snow-capped mountains of Tibet in the wake of an accident, and almost passes out from exhaustion. That is until the Mother of Ultra rescues him from his plight, and guides him to Millennium, dormant and dying. In an act of selflessness, Neil sacrifices himself to revive Millennium, and the two become one and the same. However, he loses his memories of the incident.

Fifteen years later, Neil finds himself as an employee of the World Carnival, unaware of the power that rests within him. On one of his usual shifts, he meets a young girl of the Ultra Youth, and notices a strange man staring at him from the distance, when all of a sudden a gigantic alien lifeform appears in the amusement park and begins to wreak havoc. The unprecedented attack triggers Neil's transformation into the giant of light, Millennium. Initially regarded as yet another monster, people quickly find out that Millennium is protecting mankind. Soon, this catches the eye of S, the enigmatic leaders of humanity, who approach Neil with an offer to join the attack team CUT of BASE 64 (it should be noted that other articles tell another story, that both Neil and Nolan were imprisoned in maximum-security cells by the Earth Defense Force after their battle, and that Ekin/Elite was sent to control them both).

This kickstarts the beginning of a series of events: Dark Ultraman infiltrates the Earth Defense Force under the human guise of Nolan to settle his personal vendetta against Millennium, Neil is placed under house arrest as he is deemed a threat, and BASE 64 turns their back on the Earth Defense Force to thwart the sinister plans of their leaders. Ultraman Elite merges with Ekin, and the three Ultras eventually join forces to stop S and the alien monsters once and for all.

Forty thousand years ago, a confrontation with a sinister alien race on Earth caused a brave warrior to turn against his allies. In an unfortunate turn of events, the Father of Ultra had to seal his best companion in the Dimensional Tomb alongside a plethora of monsters, which was then sent away into the deep reaches of space.

Some time after, the Dimensional Tomb begins to make its way to Earth. Millions of light years away, the Ultra Warriors gather and discuss the options available to at least mitigate the after-effects of the collision event on Earth; their solution is to send humanity Ultra-technology and a warning message heralding the tomb's arrival in ten years, believing that it is humanity's duty to protect their planet shall the Ultras not make it in time.

Millennium is a young officer of the Inter Galactic Defense Force stationed on one of the moons on the outer reaches of Nebula M78, which once served as the frontlines of the great war between the Ultra Warriors and the monster army, now a galactic prison housing notorious aliens and violent monsters. He chases an Alien Nackle across the Solar System to Jupiter, and meets Captain Shu of the 3rd Special Operations Unit of the Alien Eradication Team AKA AET UNIT III, who helps him to apprehend the fugitive alien at the cost of his own life. To save the human, Millennium entrusts some of his life force to Shu, and returns him to his home planet, Earth, but he doesn't remain there; he had not yet been issued orders to act on the planet.

Ten years later (est. 2010), the Dimensional Tomb arrives as expected, the catastrophic collision causing fragments of the tomb to scatter across the Earth. Seven monsters emerge from these fragments, their signals picked up by a quantum computer created by reverse-engineering the Ultra-technology. As humanity and the attack team AET struggle with these newfound threats, the Ultra Brothers arrive in the nick of time, taking down six of the seven monsters. The seventh entity, revealed to be Dark Ultraman, poses an emotional challenge to the Ultra Brothers, but they eventually manage to take him down as well.

However, the ones behind this catastrophe are revealed to be the Alien Baltan, who emerge as one massive entity from within Dark Ultraman's body. The Ultra Brothers, who had expended most of their energy prior, lose out to the villain, and are crucified with pieces of the tomb. Captain Shu, who witnesses this tragic outcome, unleashes the hidden power entrusted to him years ago, and becomes the silver giant Millennium, who manages to defeat the Alien Baltan with ease and saves his brothers, putting an end to the threat of the Dimensional Tomb.

Surprisingly, it is revealed that the Alien Baltan were playing right into Dark Ultraman's hands, and that he was the true mastermind all along. Nevertheless, he eventually lost to Millennium in battle, but with the Dimensional Tomb lost, he was set free again, departing for parts unknown.

A live show held alongside the Ultra Carnival in 2003 after the success of Ultraman Live Show in Bangkok in 2001.[4]

This live show Ultraman Live Show Episode: Attack the Ultra Brothers revolves around the Ultra Force, the Land of Light's planetary twin and the source of all benevolent energy in the universe, which helps to maintain the balance between good and evil. Due to the nature of the planet, only the Ultra Warriors have access to it and hence malevolent forces have always failed to capture the Ultra Force.

However, various villains somehow manage to infiltrate the planet, and the balance of the galaxy is disrupted. Millennium and the Ultra Brothers respond to a distress call to intercept the invaders, but since the Ultra Warriors are linked to the weakening state of the Ultra Force, they are easily defeated.[5]

Due to the scarcity of source footage, it is unknown how this live show played out. However, according to accounts from some people, it is said that Millennium teamed up with a now-redeemed Dark Ultraman to stop the Ultra Brothers, who had been corrupted by the villains' influence on the Ultra Force.[6][7]

In the near future, humanity stands as the dominant species on the planet, monopolizing nature and its resources to construct their cities and advance their technology. However, this comes at the expense of other lifeforms, and humanity's exploits bring to extinction many of these species.

The Vyara vaccine (维亚拉疫苗 Wéiyǎlā yìmiáo), created from a new species of microorganism discovered by an SAAR scientist, is touted as the Panacea, a remedy to cure all diseases and prolong life. However, this new discovery upsets the order of the universe, and cataclysmic disasters are expected to follow. Humanity incurs the wrath of nature, and the avatar of all life on Earth manifests itself as the monster Elubo, intent on wiping out all of humankind for disrupting the natural balance. The Ultra Brothers, including Dark Ultraman who has returned as a hero of justice, are dispatched to Earth by the Father of Ultra and Mother of Ultra to prevent this from happening; their plan is to create a new lifeform to stop Elubo, by fusing an Ultra Warrior's pure soul with Elubo's own soul. Before they reach Earth, they pin their hopes on the unawakened Ultra Warrior, Millennium, to protect the planet.

The spirit of Millennium resides within news reporter Shin, who disagrees with the usage of the new vaccine. Elubo descends onto Earth and uses microorganisms to create a monster army, leaving a trail of destruction in their wake, causing the attack team to retaliate. In the midst of all this, Shin gets injured and falls unconscious, and the monster army manage to overwhelm the attack team. Elubo appears before Shin, and before he faces certain death, Millennium calls out to him to transform.

Now fully awakened, Millennium faces Elubo in battle. While Millennium appears to have the upper hand on Elubo at first, this is only a farce, as Elubo uses his microorganisms to strengthen his body, and eventually manages to defeat the giant, depleting him of his energy. With all hope lost, humanity's future seems bleak.

Fortunately, the Ultra Brothers arrive shortly thereafter to face the monster army. Dark Ultraman confronts Elubo, and accompanied by a revived Millennium, the both of them stall Elubo for the Ultra Brothers to gather enough pure souls from the audience, with the help of the attack team. At a critical moment, the duo manage to restrain Elubo, and the Ultra Brothers direct their soul energy into Elubo, giving rise to a new lifeform: Ultraman Elite, a being whose mission is to maintain the natural balance of the universe. The three Ultras make easy work out of the monster, convincing him that humanity has learned from their mistakes and that his duty is done, though Elubo vows to return if humankind commits the same atrocities again.

With the monster army defeated, the Ultra Warriors return back to the stars, leaving humanity to pursue peaceful coexistence with other lifeforms on the planet, as ultimately the decision lies on their shoulders. 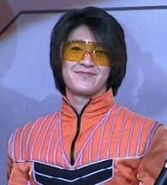 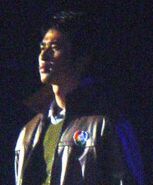 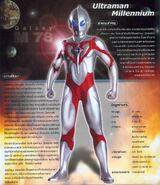