Hiroshi Maruyama
Ultraman Legend (ウルトラマンレジェンド Urutoraman Rejendo) is a Super Ultraman formed through the fusion of Cosmos and Justice. He was first introduced in the 2003 film Ultraman Cosmos vs. Ultraman Justice: The Final Battle, and made his latest appearance in Ultra Galaxy Fight: The Absolute Conspiracy.

Ultraman Legend was a figure of great power, the natives of Planet Gyashi (Jin and Shau from Ultraman Cosmos 2: The Blue Planet) recognized him as a being from their legends and held him in regard as the 'god' of the universe. He is said to possess the strongest attack in the universe.

After Ultraman Cosmos and Ultraman Justice's fight with Gloker Bishop, they flew into space to engage Giga Endra, which was preparing to destroy humanity with its laser, the Eraser Ball. The two Ultras' beams had little effect against the huge war ship, and they were knocked back and almost eradicated by the spaceship's ray. In that moment, they united into one super-being, a giant of untold power and strength, Ultraman Legend. The powerful warrior of light absorbed the destructive beam of energy and forced it back into the ship, causing an explosion larger than that of any other, which ripped the craft apart and engulfed the superhero. Legend was unscathed by the blast.

Delacion then appeared, recognising Legend by name. Ultraman Legend separated back into Cosmos and Justice to speak to them. Ultraman Cosmos vs. Ultraman Justice: The Final Battle 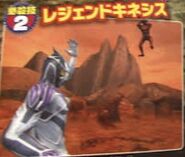 Ultraman Legend appears in the videogame Ultraman Fighting Evolution 3 as a new character. Although he's a playable character, he is unable to be saved on the memory card. Due to his finisher, he can destroy any enemies with one hit and can be only saved through an Action Replay MAX.

Ultraman Legend appeared in Mega Monster Battle NEO: Ultra Arcade Game in a card form Gold Card. His ability is Spark Legend that cannot be either dodged or evaded.

Ultra Hero Series Ultraman Legend was released in 2002 during the premiere of Ultraman Cosmos vs. Ultraman Justice: The Final Battle. Molded in purple soft vinyl plastic with silver, gunmetal, orange-gold, and cream (eyes) paint operations, the figure sports 3 points of articulation on the arms and waist.

Exclusive to Ultraman Festival 2003 & Ultraman Club, this Ultraman Legend figure is a transparent redeco of the toy above. It was currently unclear if this smoke black color was meant to represent.

The original Ultra Hero Series Ultraman Legend is re-released for the 2004 lineup, without any changes on the paint applications.

The Ultraman Legend figure is once again reissued in the 2009 Ultra Hero Series line, as the 31st release with new packaging.

Released as part of the "Super Sofubi Battle Series" lineup by Bandai China, this Ultraman Legend is likely to be a new mold, or a downscaled version of the original Ultra Hero Series toy as there is no Ultra Hero 500 mold for him (so far), Like all Ultra Hero 500 toys, the details on rear section are mostly omitted.

For some reason, the toy also includes a groove underneath the left foot, which indicates that the toy was supposed to have a Live sign for the Bandai China's version of DX Victory Lancer or X Devizer.

Ultraman Legend is packed with King Joe. Ironically, considering the lore of Ultraman Legend's power, King Joe would've been destroyed in one shot.

Cosmos and Justice merging into Legend 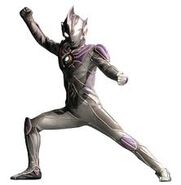 Legend with Cosmos and Justice