None
Ultraman Krod (ウルトラマンクロード Urutoraman Kurōdo) was the partner of Ultraman until he was killed by the Kaiju Bemular. He was only shown as part of the Ultraman Secret Encyclopedia in the manga "Ultraman To Earth" written by Junichi Miyata.

Krod was the partner of the original Ultraman. While the two were venturing to an alien world that was under attack, there they found Bemular destroying a city. Krod recklessly charged and grabbed the monster, then pushed it off the planet. However, the creature bit into his neck and delivered a mortal wound. Bemular took the chance to escape and fled. By the time Ultraman reached him, Krod was dying, and he on his Beta Capsule to his friend. 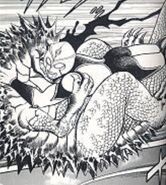