"I have many names, on many different planets. For example... Ultraman King. That is what the humans call me."

Unknown
Ultraman King (ウルトラマンキング Urutoraman Kingu) is one of the oldest and most powerful Ultras in the history of the Ultraman Series, existing before even the construction of the Plasma Spark that turned the Residents of the Land of Light into Ultras. With his age, knowledge and miraculous powers, King is a greatly revered figure in the World of the Land of Light, and perhaps throughout the Multiverse.

Despite the name, he is not the king of the Land of Light and he observes the events of the universe (and beyond) while meditating on a planet where only he lives, though his true home world is unknown. "King" is also not his original name, as he stated that is the name humanity gave him and that he has had many from many races across the universe.

A legendary Ultraman from the Land of Light, King was alive before the creation of the Plasma Spark. He is extremely powerful in the appearances he has made, showing he is able to bring Ultraman Leo back to life after he'd been sawed to pieces by Black Directive without any effort. His age was revealed to be 300,000 years in the 2003 movie New Century 2003 Ultraman Legend: THE KING'S JUBILEE, but the chronological order of this work is unclear.

He usually lives alone on a nearby planet that he chose to be his home, Planet King. Also, in Ultraman Mebius Gaiden: Hikari Saga he lived on the unmanned Planet Twirl and was disguised as a mysterious old man.

"Belial, who tries to tarnish this land. You can pay for your own deed in the darkness. Forever."

During the events of the Revolt of Belial, during which Belial returned after his merger with Alien Rayblood to attack the Land of Light out of revenge, King appeared and defeated Belial while also forming the Space Prison to seal him. This fight was witnessed by by Mother of Ultra, Father of Ultra, and Zoffy. King then sealed the Giga Battle Nizer in the Valley of Flames. Mega Monster Battle: Ultra Galaxy Legends The Movie

Before his appearance on Earth, King had rescued Astra, whom was held captive by Alien Magma and telling Astra that Leo is still alive. During Ultraman Leo's battle with Pressure, King came to Earth and assisted Leo in destroying Alien Pressure, restoring the Ultra to his full size by undoing Pressure's dark magic with his King Hammer, then giving him the Ultra Mantle as a weapon that would help him in his battles. Japan Masterpiece Folklore Series - Ultraman King vs the Magician

King returned to Earth months later to reveal Alien Babarue, who disguised himself as Leo's brother Astra to steal the Ultra Key, which was later safely returned. The Leo Brothers and the Ultra Brothers, Time of Victory

When Leo was killed by Alien Bunyo, Ultraman King revived him, then urged Leo on to continue his desperate defense of Planet Earth. He then proceeded to observe Leo's final battle against Black End alongside Seven from the Land of Light. Terror of the Saucer Race Series - The Life of Leo! The Miracle of King!

Ultraman Hikari searched for power to save Arb, and heard it would be granted to him by a powerful being, who was revealed to be Ultraman King. King gave him the Knight Brace, because his heart was pure. He later warned Hikari not to fight on Arb because of his anger, but Hikari disobeyed, and hence gained the Hunter Knight Tsurugi armor from a combination of the dying crystals of Arb and his own rage. Ultraman Mebius Gaiden: Hikari Saga

Ultraman King appeared in this special to motivate the former crew of GUYS, Ryu Aihara not to give up hope when they were battling Armored Darkness. Ultraman Mebius Gaiden: Armored Darkness

Ultraman King is seen watching over Ultraman Zero's training with Ultraman Leo along with Astra. It was also Ultraman King who explained to Zero the truth of his "exile" and that his father is Ultraseven. When Seven’s eye slugger was sent as an S.O.S., Ultraman King sent Zero and the Leo Brothers to the battle. Later, after Belial is defeated by Zero, he gives a speech to all of the assembled Ultras in the Land of Light. Mega Monster Battle: Ultra Galaxy Legends The Movie

Despite not making a major appearance, he briefly appeared in the end of the movie, returning to the Land of Light along with the Inter Galactic Defense Force after Belial's army have been defeated. Ultraman Zero The Movie: Super Deciding Fight! The Belial Galactic Empire

Following the events of the first appearance of Absolute Tartarus, King sensed that something was happening after Tartarus entered his space-time traveling portal. Ultra Galaxy Fight: The Absolute Conspiracy

While the Ultras fought various evil aliens and monsters in what would be known as the Dark Spark War, King was one of the few Ultras seemingly absent. King is one of the Ultras whose fate in the war and its aftermath is unknown, as there has been no appearance of his Spark Doll. Regardless, with Lugiel's defeat all the Spark Dolls were free of their curse and returned from whence they came. Ultraman Ginga

Despite not making a real appearance in this movie, he was seen in a flashback along with Ultraman Leo and Astra. However, sometime before the movie, Ultraman King created the Ultra Fusion Brace. He entrusted it to Zero to go to Earth in order to pass it to Hikaru. Ultraman Ginga S The Movie: Showdown! The 10 Ultra Warriors!

Sensing the revival of an ancient evil, King called Ace, Hikari, and the Leo Brothers, to undertake missions to stop this event. Hikari was tasked with going to Earth and protecting the Victorium Core from Yapool, the Leo brothers were sent to the planet where Juda was reviving, and Ace was sent to rescue Ultraman Ginga from Ace Killer. Ultra Fight Victory

"The Universe was almost destroyed once. The one who saved it was an old guy named Ultraman King. The Universe was like your body, on the verge of death. We Ultramen can fuse our bodies with someone to heal them. But the whole Universe... It was just too big. It wasn't destroyed, but Old Man King is now dispersed throughout the entire cosmos. You can call out to him, but there's no response."

―Zero as he recounted the events of Crisis Impact.

19 years prior, King responded to the Toba family's desire for their unborn child's health. King healed the unborn child allowing Laiha to be born, but also causing her to develop the symptoms of a Little Star bearer earlier than the events of the Childhood Radiation spread. King appeared at the end of the war with Belial, when the evil Ultra triggered Crisis Impact and used his powers to bond with the entire universe to undo the damage. The essence of Ultraman King spread across the universe as Childhood Radiation, at the cost of his consciousness being too scattered to be perceived by any other Ultra Warriors. In order to activate the Ultra Capsules and part of a long-term of raising Ultraman Geed, Kei Fukuide dispersed the Carellen Element across the Earth, magnetizing the Childhood Radiation into Earth inhabitants as Little Stars.

Although Laiha's Little Star was repressed from the trauma of losing her parents, it resurfaced and allows her to perceive King's voice at occasional moments, such as stopping her from killing Kei and warning her of Belial's arrival. After Geed was absorbed by Chimeraberus, Laiha went to her birth hospital, enabling a full contact with the Ultra and obtain his help in rescuing Geed/Riku from Chimerberus. Through Laiha's prayer, her Little Star was harvested by Riku as King Capsule, allowing him to assume Royal Megamaster and put an end to his father.

"My body has been restored, and the universe's wounds have healed. From now on, this planet's future is in the hands of you two."

―King's words to Riku and Laiha

When Belial resumed Atrocious and begin absorbing King's Childhood Radiation, this causes the stability of the universe to be disrupted. Through Geed/Riku's courage and determination, King summoned copies of Geed's other forms and allowing him to defeat Belial Atrocious. After Belial's death, King's body was finally restored as the universe no longer needed a host to remain stable. Before departing Earth along with Father of Ultra, King entrusted the future of the Earth to Laiha and Riku, and noted Geed has more potential in himself. The Symbol of Geed 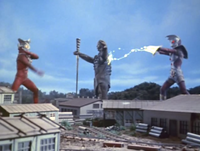 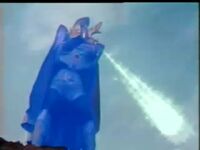