Ultraman Kids (ウルトラマンキッズ Urutoraman Kizzu) was a 1984 television special aired in Japan featuring several Ultraman characters as children. The short was successful, as several others were produced. The shows taught life lessons and were comedic in tone. A sequel series was released in 1992, and lasted for 26 episodes. The second show was more adventure oriented and featured more characters, though mainly focusing on Maa, Pico, Bal, and a new character named Piko (Not to be confused with Hanuman's human host) based upon Yullian. 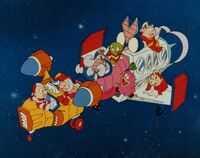